The BRITs is undoubtedly the biggest event on the UK music calendar. Some of the greatest British acts have launched their global careers on its stages, and each year features unforgettable performances from both homegrown acts and international talent. From Adele to Justin Bieber to Coldplay and more, this year’s show did not disappoint.
As the official audio and download parter of the 2016 BRIT Awards, the Google Play Music team is thrilled to be part of this landmark event. Thanks to the support of artists, managers, labels, publishers and societies, we made participating performances available as downloads and streams available only on Google Play Music, with proceeds going to charity. Download or stream the performances for free until Wed, March 2 (we’re picking up the cost), after which all the content will be available on Play Music for purchase until March 24. 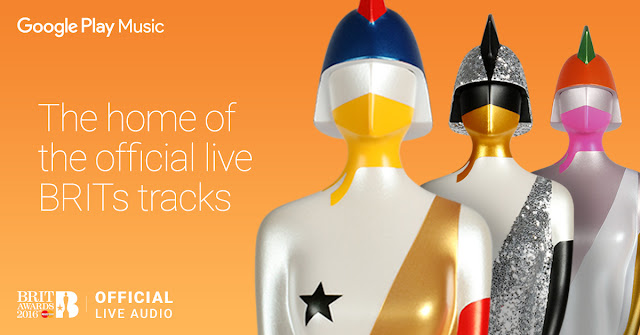 Every penny raised from both the downloads and streams on Google Play Music will go to Nordoff Robbins which provides music therapy services to adults and children, and The BRIT Trust which supports performing arts in the UK. Last year, the amount we raised went above all previous BRIT Award charitable records, and with your help we hope to do so again.

Streams and downloads of tracks by participating artists include: Adele, Justin Bieber, The David Bowie Band featuring Lorde (a tribute to David Bowie), Coldplay, The Weeknd, Little Mix, James Bay and Jess Glynne.* We hope you enjoy all of these performances and help us make a difference in the lives of many by supporting two great causes.