Last month we published an analysis of how people behave before and during the Thanksgiving holiday in the US. We saw the most important days of the year for retailers, how to take advantage of the top transaction days, and when to take action.
Today we are looking at the patterns of behavior over the holidays and into the new year with the objective of understanding how digital marketers can prepare for 2015.
After looking at data from the previous three years, we found two interesting insights:
Read on to learn more about the analysis we performed and how to take advantage of the trends we found, it will help you get a head start on 2015!
User Behavior Trends
Patterns can tell us a lot about data, they are intuitive and show us a lot of information at a glance. With that in mind, we produced the charts below to show how people behave around Christmas and New Year’s Eve. We wanted to understand the differences between cultures, so we focused on the trends from three large economies: US, UK and France. All the charts show data from December 11 to January 14 for the last three years and the two vertical grey areas represent Christmas Day and New Year’s Eve.
United States: the transactions trend clearly shows that users purchase mostly up to a week before Christmas Day and no improvement is seen in early January, although sessions do return to normal quickly after New Year’s Eve. Publishers should take advantage of this rebound in sessions, while retailers may want to wait on providing deals until sales bounce back fully. 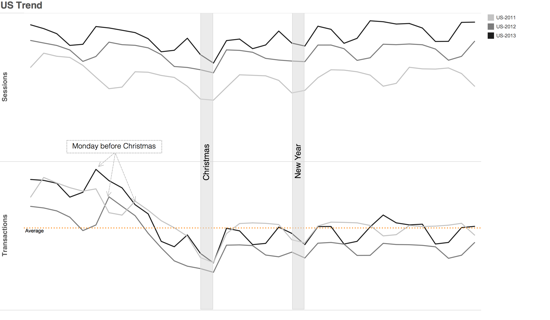 United Kingdom: transactions decline sharply until Christmas and then start rising sharply from December 26, and about a week after New Year’s Eve it raises to levels about the same or higher than pre-holiday, so you might consider creating marketing campaigns and promotions to take advantage of January’s rise. Sessions follow a similar pattern. 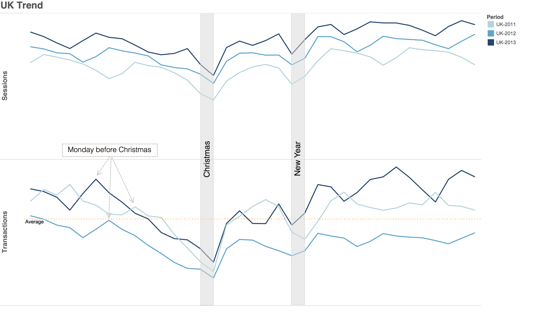 France: transactions and sessions follow a similar pattern as in the UK, but with a significant decline during New Year’s Eve. As you can see, there is a major spike in the second Wednesday of January every year, that’s the day Winter sales begin in France! Unlike in the US, January is an important month for French retailers, should we say the French Cyber Wednesday? 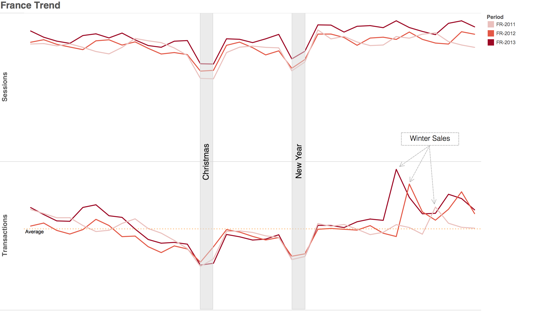 Get a head start on 2015
So how can you take advantage of those trends to be more successful during the coming year? Here are some ideas for you to act upon right now:
About the Data & Charts
In order to perform this analysis, we looked at billions of sessions from authorized Google Analytics users who have shared their website data anonymously (read more).
Posted by Daniel Waisberg and Jocelyn Whittenburg