Now that we’ve survived the holiday season, it’s time to get the year started with some Q1 insights from Google Analytics!  Over the holiday season, retailers are inundated with data about the best shopping days, when to start their sales, and predictions about which items will be popular.  But what to do once the furor dies down?  How can retailers make the most of Q1?
Here at Google Analytics, we delved into our Q1 data from 2013 and 2014 in the US to provide some insights to guide you in the first quarter of 2015.  In particular, the weeks around Valentine’s Day and the Super Bowl provided some notable trends.  Our analysis encompasses millions of businesses large and small who are using Google Analytics.  See the end of this article for more about our dataset.
The Day of the Big Game:  A Low Point for Online Shopping
We took a look at the first big marketing event of Q1:  Super Bowl Sunday.  The day of the big game, we saw lower numbers across the board.  Sessions were down 11% compared to the average for the quarter.  Similarly, transactions and conversion rates were down on average 16% and 5% respectively.  In both 2013 and 2014, the sessions and transaction numbers for the day of the Super Bowl fall into the bottom quartile for the quarter.
Clearly, on the day of the game, online purchasing is not a priority.  However, as we see later on in this post, this period of time serves as the turning point for transactions and conversion rates in the quarter.  The brand advertising that is such a big part of Super Bowl Sunday may help businesses capitalize on increased consumer buying behavior later in the quarter.
Best Romantic Shopping Day:  The Sunday before Valentine’s Day
We also delved into the second big marketing event of Q1:  Valentine’s Day.  In particular, we evaluated the week preceding the big day to find any pre-holiday patterns.  It turns out that in both 2013 and 2014, the Sunday before Valentine’s Day sees the biggest spike in week-over-week transactions with an average bump of 10%.  The same holds true for conversion rates and sessions, with an average increase of 6% and 4% respectively.  Besides a week-over-week increase, we also see that transactions are 5% higher on that day than for the average Sunday in the quarter.  The bump in transactions could indicate that consumers are using that Sunday to find and purchase their gifts, making it a good opportunity to invest in getting consumers to your site for some Valentine’s Day shopping.  If you plan to invest in advertising for this holiday, one way to prepare for Valentine’s Day is to adjust your bids.
Between the Super Bowl and Valentine’s Day:  The Q1 Turning Point
Unless you’re lucky enough to sell items for diet, exercise, or other big new year’s resolutions, retailers often see sales slow in Q1 as consumers reduce gift-buying.  The chart below shows that for most of January, transactions are indeed below the average for the quarter.
When should retailers spend marketing dollars to bounce back from this holiday hangover?  We see that transactions in both 2013 and 2014 start to ramp up as the key marketing dates approach: Valentine’s Day and Super Bowl Sunday.  In particular, the week of February 5th (also known as the week after the Super Bowl and the week before Valentine’s Day) marks the first time that transactions hit the average or above for the quarter.
The graph below shows that in 2013 the week after the Super Bowl was above the average, whereas in 2014 that week was at the quarterly average.  In both years, this week has the highest week over week growth in transactions and conversions rates for Q1 at 6% for both metrics.  Sessions, however, display only a 0.4% increase week-over-week, not even close to being the highest for the quarter.  Based on this information about sessions, it’s clear that the uptick in buying behavior is not simply a function of consumers spending more time online, it’s an indication of increased intent to purchase during the time they do spend online.  If we look at average conversion rates before that week compared to the average conversion rates for that week and the rest of the quarter, we see a 6% increase. 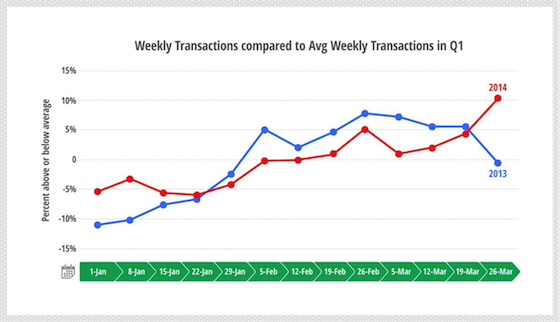 So, as you plan your budgets, promotions, and campaigns in Q1, keep in mind that consumer activity will tend to increase throughout the quarter.  In particular, transactions tend to get a big bump during the week between Super Bowl Sunday and Valentine’s Day.  We know it’s hard to get back in gear after the holidays, but we hope our insights will help you think clearly and creatively about your marketing plans in the first quarter.
About the Data & Charts
In order to perform this analysis, we looked at billions of sessions from authorized Google Analytics clients who have shared their website data anonymously (read more).
Posted by Jocelyn Whittenburg and Daniel Waisberg