TL;DR Google News has launched a “Local Source” Tag to surface local coverage of major stories.
Local news publishers play a critical role in covering the stories that impact us every day in our cities, schools and neighborhoods. Local reporters are often members of the communities they serve, bringing additional context and perspective to a story. Local news is also important to our users: according to the March 2015 Pew Research study Local News in a Digital Age, which looked at three metro areas across the U.S., “nearly nine-in-ten residents follow local news closely—and about half do so very closely”.

With more than 75,000 news sources, many of the publishers in Google News specialize on specific topics and locales. The local section in Google News surfaces content from regional papers to hyper-local blogs that otherwise wouldn’t appear in national news.

But not all local stories stay local. When a local story is picked up by national publishers, it can be difficult for local sources to be heard even after they’ve done the legwork and research to break a story. Consistent with our goal to surface diverse perspectives, we’re excited to share that a new "Local Source" tag is now live across all Google News editions. This new feature brings greater exposure for local news outlets reporting on stories that have gone national. "Local Source" articles are identified automatically by looking at where a publisher has written about in the past and comparing that to the story location. You’ll see the tagged articles in the expanded story box on news.google.com and in the Google News & Weather iOS and Android apps. 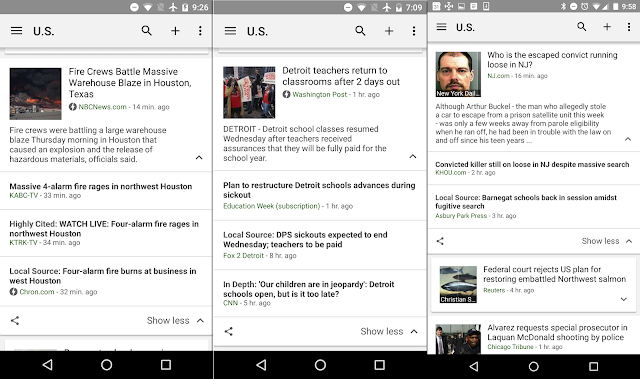 A great example of hyperlocal news is 9-year-old reporter Hilde Lysiak. Hilde made headlines when she reported on the story of a murder in her hometown which she published on her own local news site -- Orange Street News (AMP-enabled to load really fast on mobile). Her reporting attracted the attention of major newspapers and morning shows like Good Morning America after she was criticised for being too young to cover hard news. It was one reason we invited Hilde to visit the Googleplex on World Press Freedom Day 2016. And just like Hilde, at Google News we are committed to connecting people to the news that matters most to them -- be that local, national or international.