It’s estimated that up to 7,000 different languages are spoken around the world--the vast majority of them used by less than 100,000 people. But for those native speakers, the web--roughly a third of which is in English--is pretty inaccessible.

The Google Translate Community is an effort to bring the web to more global communities… and more global communities to the web. Over the past week, thousands of proud Frisians from the Dutch province of Friesland--including school children at CSG Liudger Burgum--have rallied to contribute over 200,000 thousands of translations to the database in an effort to make their culture and traditions more accessible. That’s an impressive feat for a language spoken by just 400,000! 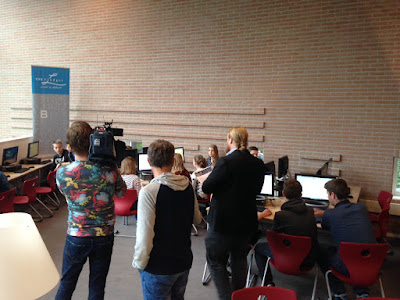 School kids at the CSG Liudger added translations last week
Translation is part of our ongoing effort to make the world’s information universally accessible and useful, and this is as true today as more and more parts of the world come online as it was in 2006 when we first launched Google Translate. By improving the quality of translations on the web we can give people access to useful, relevant content and reduce barriers to understanding on both sides.

If it weren't for the Translate Community, we wouldn't be able to bring many small languages that now include Basque, Catalan and Welsh and even lesser-known tongues like Sinhala in Sri Lanka or Sesotho in South Africa. While our translation algorithm learns from language found on the web, we’re grateful for the contributions from the global community that make our systems even smarter.

With the help of the Frisian people, as more Frisian is added to Google Translate, we hope to be able to translate Friese passages--including on websites and even street signs-- into dozens of other languages for people from around the world to understand and appreciate. We value all the support we've received over the last week and we hope that together with our communities, we can improve translation quality for Frisian and even more languages in the future. Quality translations help bring cultures and languages online, preserving them for their own people through the web, and promoting them to the world.

While we’re incredibly impressed by the progress made in just a single week, we’re just getting started and have a long way to go. So far, more than 100 similar translate-a-thons--including those in Nepal and Myanmar--have added more than 10 million words to the Community. That’s 17 times more words than Tolstoy used for War & Peace!

But as more than 500 million people use Google Translate every month, the more than 1 billion translations a day are even more important than ever to help people communicate and access information across languages. You can help us to make the experience even better by suggesting your corrections using "Improve this translation" functionality on Translate and contributing your own lingua franca to the Translate Community.