For the last 10 years we’ve been running the Doodle 4 Google program in Australia -- an opportunity for school-age artists to apply their own personal artistic vision to the Google logo and transform it into a work of art. The winners then have their artwork placed on the Google Australia homepage for all to see. It’s like a young artist’s work being pinned on the biggest fridge in the country.
Past winners included Olivia Kong from Hornsby Girls High School in 2013 with her vision for “If I was an explorer”, and in 2011 Timothy Winkels from Padua College in Victoria with his vision of “My Future Australia”.

Doodle 4 Google 2015 was won by Ineka Voigt from Canberra High School in ACT, for her entry “Stolen Dreamtime”. In response to the theme of “If I could travel back in time I would …” Ineka wrote that “... I would reunite mother and child. A weeping mother sits in an ochre desert, dreaming of her children and a life that never was ...all that remains is red sand, tears and the whispers of her stolen dreamtime”. 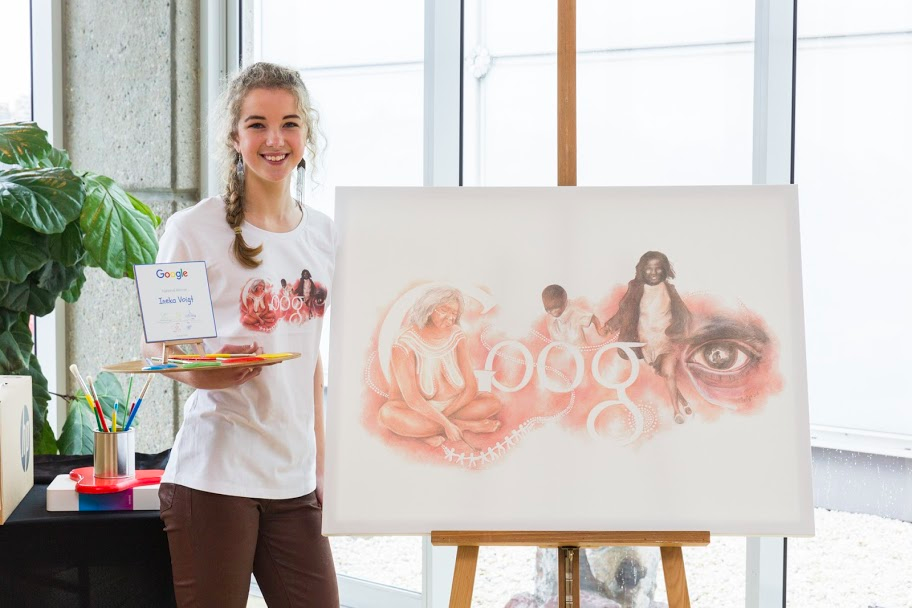 Ineka with her winning doodle
Judges this year included leading artist Bronwyn Bancroft and ARTEXPRESS curator Leeanne Carr, who along with Google’s other judges agreed that Ineka’s tremendous art work deserved pride of place on the Google homepage. It’s a powerful and beautiful image that is not only a brilliant artwork, but helps bring attention to the critical issue of reconciliation in Australia.  We’re proud to have it on our homepage today.