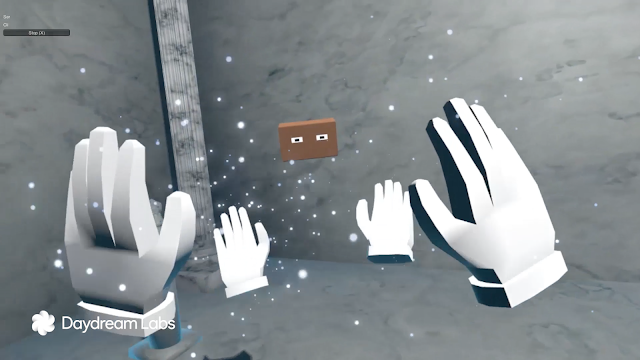 At Daydream Labs, we have experimented with social interactions in VR. Just like in real reality, people naturally want to share and connect with others in VR. As developers and designers, we are excited to build social experiences that are fun and easy to use—but it’s just as important to make it safe and comfortable for all involved. Over the last year, we’ve learned a few ways to nudge people towards positive social experiences.

What can happen without clear social norms

People are curious and will test the limits of your VR experience. For example, when some people join a multiplayer app or game, they might wonder if they can reach their hand through another player’s head or stand inside another avatar’s body. Even with good intentions, this can make other people feel unsafe or uncomfortable.

For example, in a shopping experiment we built for the HTC Vive, two people could enter a virtual storefront and try on different hats, sunglasses, and accessories. There was no limit to how or where they could place a virtual accessory, so some people stuck hats on friends anywhere they would stick—like in front of their eyes. This had the unfortunate effect of blocking their vision. If they couldn’t remove the hat in front of their eyes with their controllers, they had no other recourse than to take off their headset and end their VR experience.

Everyone should feel safe and comfortable in VR. If we can anticipate the actions of others, then we may be able to discourage negative social behavior before it starts. For example, by designing personal space around each user, you can prevent other people from invading that personal space.

We built an experiment around playing poker where we tried new ways to discourage trolling. If someone left their seat at the poker table, their environment desaturated to black and white and their avatar would disappear from the other player’s view. A glowing blue personal space bubble would guide the person back to their seat. We found it’s enough to prevent a player from approaching their opponents to steal chips or invade personal space.

If you want people to interact in positive ways—like high-fiving ? —try giving them an incentive. In one experiment, we detected when two different avatars “touched” each other’s hands at high speed. This triggered a loud slapping sound and a fireworks animation. It sounds simple, but people loved it. Meanwhile, if you tried to do something more aggressive, like punching an avatar’s body, nothing would happen. You can guess which behavior people naturally preferred.