We love virtual reality. Unlike any other technology or screen, VR can make you feel like you're somewhere else. Without a ticket, you can get front row seats at Coachella and visit a world-renowned museum to see extinct animals come back to life. You can take field trips to almost anywhere and capture vivid moments you can revisit anytime. It’s transporting.

At I/O this May, we announced Daydream, our platform for high-quality mobile VR. Our goal for Daydream is to simplify the complexity behind virtual reality. It should be mobile so you can easily carry it with you, and it should be friendly and accessible so everyone can enjoy using it.

We’ve been working with developers, smartphone companies and content creators to make the dream a reality — and now, we’re excited to share updates across the three key elements of Daydream: smartphones, headsets and VR experiences. 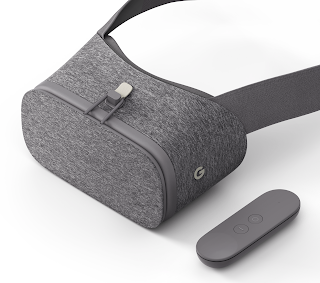 Incredible experiences
From the universe of YouTube videos to a magical world where you can cast spells and levitate objects, there is a wide range of experiences coming to Daydream:

Daydream View arrives this November at the Google Store and Bell, Rogers, Telus and Best Buy Canada for $99.
All of this is just the beginning of our work with Daydream. In the coming months, we’ll be launching with more apps and partners, and over the coming years, we’ll continue our goal of bringing high-quality, mobile VR to everyone.
Posted by Clay Bavor, VP Virtual Reality