Adobe Flash allows web pages to display rich content—but sometimes that can put a squeeze on your laptop’s battery. So we’ve been working with Adobe to ensure that your experience on the web can be power-efficient as well as rich and interactive—and today, we’re introducing an update to Chrome that does just that.

When you’re on a webpage that runs Flash, we’ll intelligently pause content (like Flash animations) that aren’t central to the webpage, while keeping central content (like a video) playing without interruption. If we accidentally pause something you were interested in, you can just click it to resume playback. This update significantly reduces power consumption, allowing you to surf the web longer before having to hunt for a power outlet.

This feature will be enabled by default on Chrome’s latest desktop Beta channel release starting today, and will be rolling out soon to everyone else on Chrome desktop. If you need to manually enable it, just head to Chrome’s content settings and select “Detect and run important plugin content.” 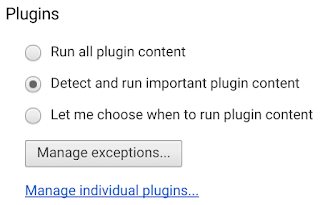 We'll be rolling out more power improvements in the coming months - stay tuned!