Everyone has the fundamental right to express who they are, yet all too often we bear witness to hatred and violence directed at people who peacefully and lovingly pursue happiness. The mass shooting in Orlando, Florida, earlier this month is a horrifying example.

Google’s mission has always been to make information universally accessible. And within that mission lies the belief that the more knowledge we have, the more tolerant, inclusive and respectful the world ultimately will be.

Pride is a time when those who have access to vibrant LGBTQ communities take to the streets to celebrate the freedom to live and love. Yet there are still multitudes of lesbian, gay, bi, transgender and queer (LGBTQ) people in the U.S. and around the world who are lonely and ostracized—who cannot participate in Pride due to strict anti-LGBTQ laws or social stigma.

To bridge this gap, we've created #prideforeveryone—a virtual reality Pride experience that anyone can access. For the past several weeks, Googlers from 25 countries have been marching in their local Pride parades to document the truly global face of the LGBTQ community in 360 degrees. This VR montage, available via YouTube 360 and Google Cardboard, is the result.

Google has a long track record of leadership in LGBTQ rights, including taking a stand against discrimination in sports at the Sochi Olympic games, becoming one of the first companies to provide full coverage of transgender employee healthcare, and standing up for same-sex and domestic partner rights and benefits in places around the world where they may not otherwise exist.

Even in the U.S., where we’ve achieved greater levels of equality, only 52 percent of the LGBTQ population have ever participated in a parade. Transgender people face legislation that effectively dehumanizes them. In Orlando, the LGBTQ community bore the brunt of the worst mass shooting in U.S. history. This is simply wrong.

With #prideforeveryone, we stand prouder than ever in our embrace of the LGBTQ community. As always, we invite others to stand with us. 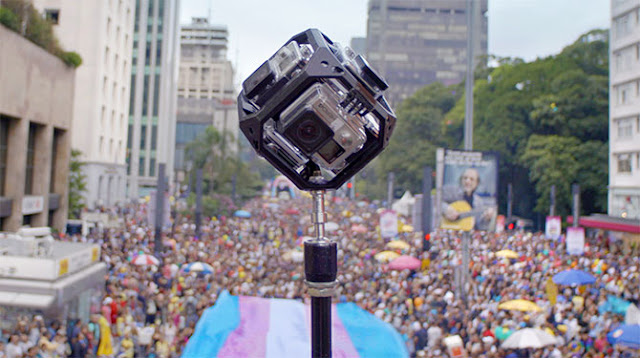 A 360 camera is anchored on a moving float in the São Paulo Pride parade. The trans flag and a crowd of more than 2 million people can be seen in the background.