The Google Assistant is becoming even more conversational and visual – helping people get things done, save time and be more present. And developers like you have been a big part of this story, making the Assistant more useful across more than 500 million devices. Starbucks, Disney, Zyrtec, Singapore Airlines and many others are engaging with users through the Actions they've built. In total, the Google Assistant is ready to help with over 1 million Actions, built by Google and all of you.


Ever since we launched Actions on Google, our mission has been to give you the tools you need to create engaging Actions, making them a part of people's everyday lives. Just over the past six months we've made significant upgrades to our platform to bring us closer to that vision. We made improvements to help your Actions get discovered, opened Actions on Google to more languages, took a few steps toward making your Actions more creative and visually appealing, launched a new conversation design site, and last week announced a new program to invest in startups that push the Assistant ecosystem forward.

Today, I want to share how we're making it even easier for app and web developers to get started with the Google Assistant.


Think of your Actions for the Google Assistant as a companion experience to your app that users can access at home or on the go, across phones, smart speakers, TVs, cars, watches, headphones, and, soon, Smart Displays. If you want to personalize some of the experiences from your Android app, account linking lets your users have a consistent experience whether they're in your app or interacting with your Action.

We added support for seamless digital subscriptions so your users can enjoy the content and digital goods they bought in the Google Play Store right in your Assistant Action. For example, since I'm a premium subscriber in the Economist's app, I can now enjoy their premium content on any Assistant-enabled device. 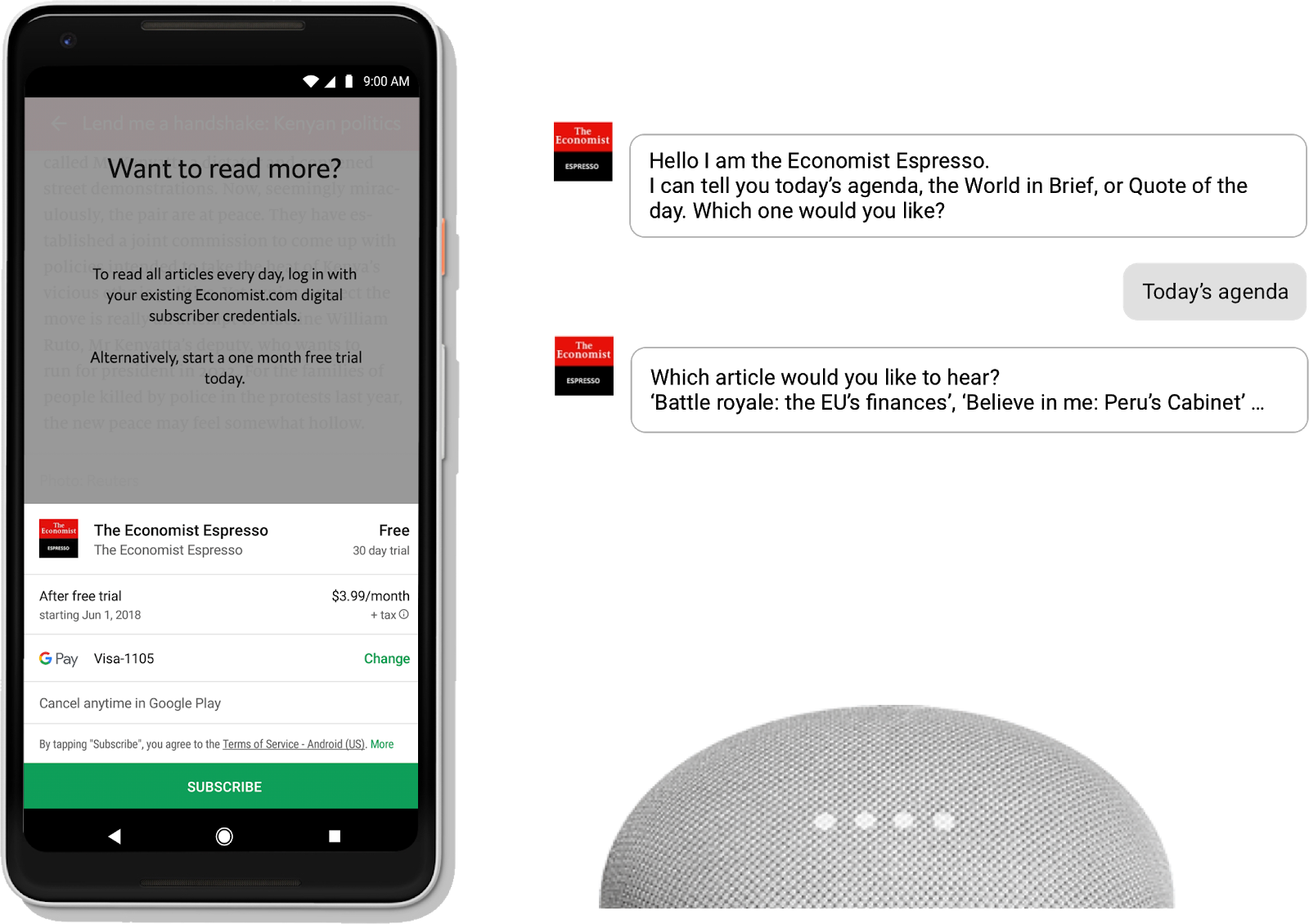 And while you can already help users complete transactions for physical goods, soon you will be able to offer digital goods and subscriptions directly from your Actions.

The Assistant blends conversation with rich visual interactions for phones, Smart Displays and TVs. We've made it so your Actions already work on these visual surfaces with no extra work.

Starting today, you can take this a step further and better customize the appearance of your Actions for visual surfaces by, among other things, controlling the background image, defining the typeface, and setting color themes used in your Action. Just head to the Actions console, make your changes and test them in the simulator today. These changes will be available on phones, TVs and Smart Displays, when they launch.

Here's an example screenshot from a demo Action: 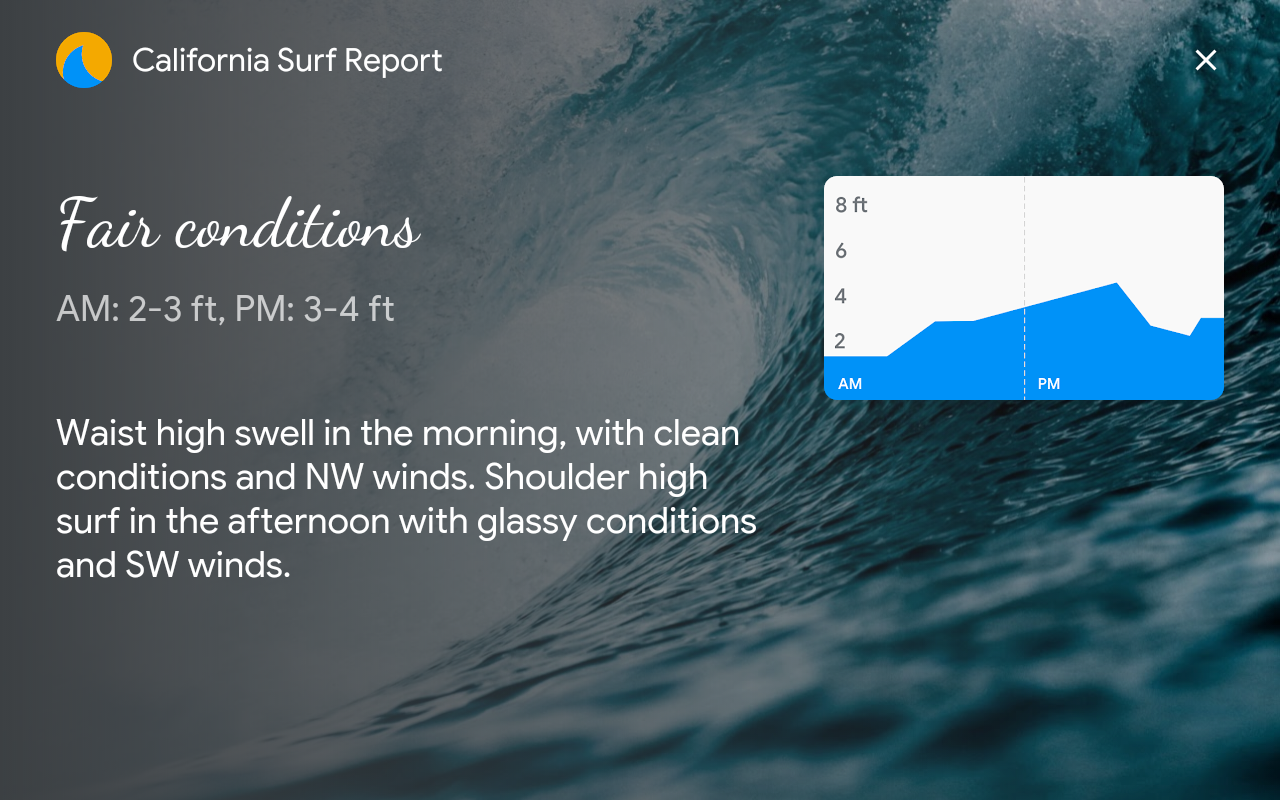 And below, you can see how Volley was able to create a full screen immersive experience for their game "King for a Day." The ability to create customizable edge-to-edge visuals will launch for developers in the next few months. 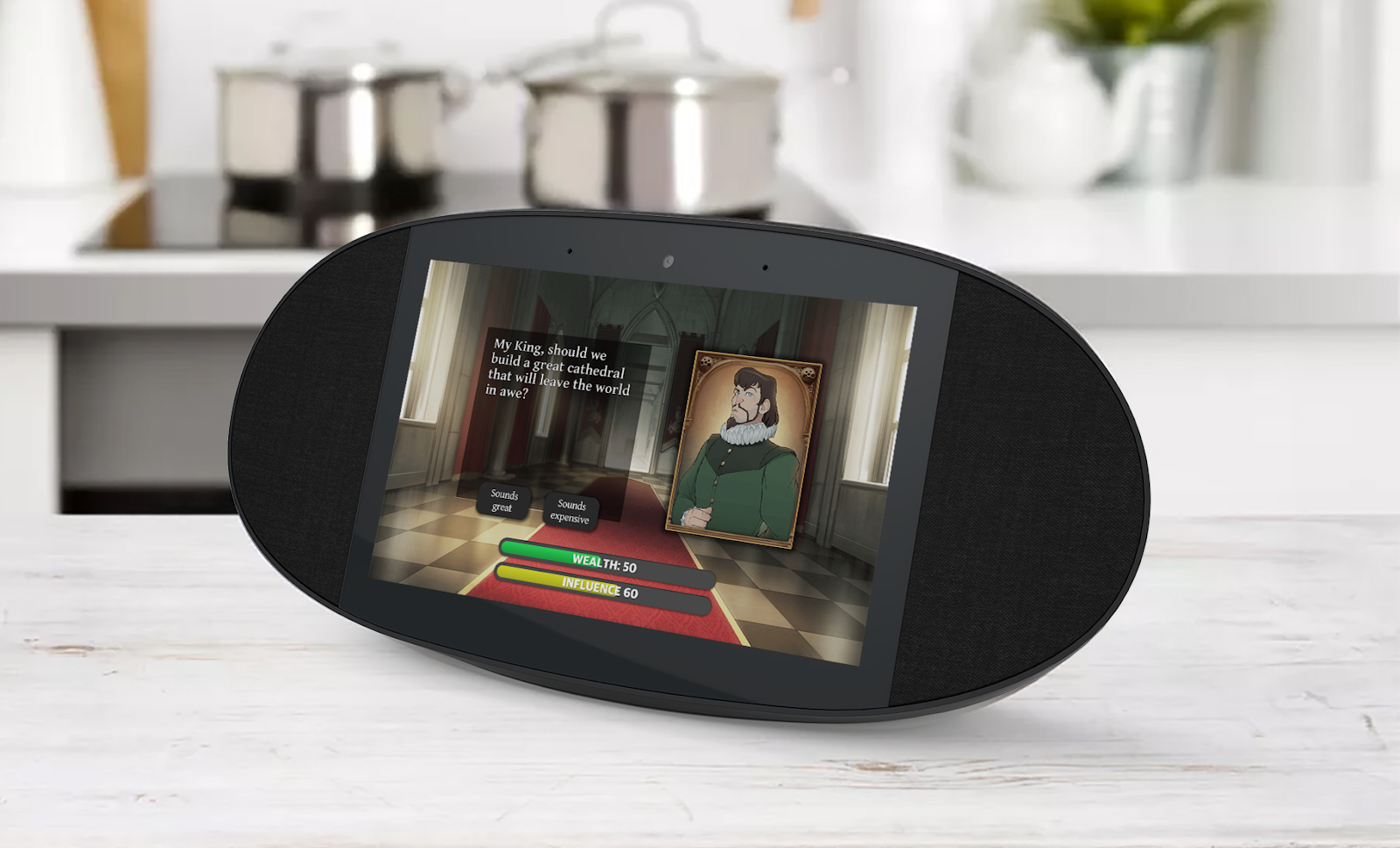 In the Android keynote today, we announced a new feature called App Actions. App Actions are a new way to raise the visibility of your Android app to users as they start their tasks. We look forward to creating another channel to reach more users that can engage with your App Actions in the Google Assistant.

App Actions will be available for all developers to try soon; please sign up here if you'd like to be notified.

Find new users and keep them coming back

After you've built an Action for the Assistant, you want to get lots of people engaged with your experience. You can already prompt your users to sign up for Action Notifications on their phones, and soon, we'll be expanding support so users can get notifications on smart speakers and
Smart Displays. Today we're also announcing three updates aimed at helping more users discover your Actions and keeping them engaged on a daily basis.

Map your Actions to users' queries with built-in intents

Over the past 20 years, Google has helped connect people with the information, services and content they're looking for by organizing, ranking, and showing the most relevant experience for users. With built-in intents, we're bringing this expertise to use in the Google Assistant.

When someone says "Hey Google, let's play a maps quiz" they expect the Assistant to suggest relevant games that might pertain to geography. For that to happen, we need to understand the user's fundamental intent. This can be pretty difficult; just think of the thousands of ways a user could ask for a game.

To handle this complexity, we're beginning to map all the ways that people can ask for things into a taxonomy of built-in intents. Today, we're making the first set of these intents available to you so you can give the Assistant a deeper understanding of what your Action can do. As a result, the Assistant will be able to better understand and recommend Actions to meet a user's intent. We'll be rolling out hundreds of built-in intents in the coming months.

Today you can implement built-in intents in your action and test them in the simulator. You'll be able to use these in production soon.

Promote your Actions from anywhere a link works
We're now making it easier to drive traffic to your Actions with Action Links. These are hyperlinks you can use anywhere—your website, emails, blog, even social media channels like Facebook and Twitter—that deep link directly into your Action.

Now, when a developer like Headspace has something new to share, they can spread the word and drive engagement directly into their Action from across the web. Users can click on the link and jump into their Action's experience on phones and Smart Displays, and if they click the Action Link while on desktop, they can choose which Assistant-enabled device they'd like to use – from smart speakers to TVs. Go see an example on Headspace's website, or give their Action Link a try here. 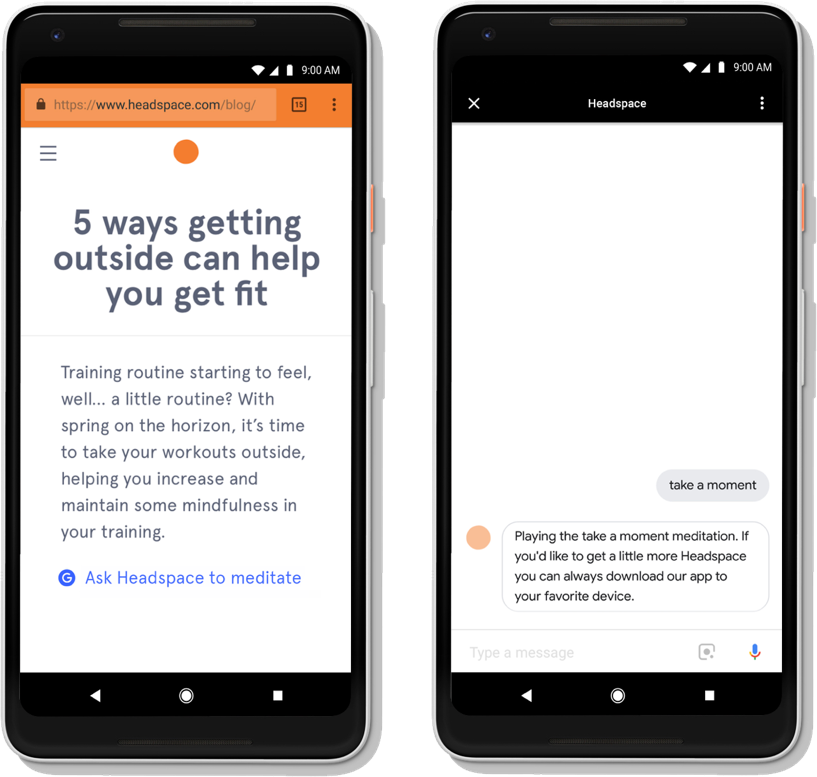 If you've already built an Action and want to spread the word, starting today you can visit the Actions console to find your Action Links and get going.

Become a part of your users' daily routines

To consistently re-engage with users, you need to become a part of their daily habits. Google Assistant users can already use routines to execute multiple Actions with a single command, perfect for those times when users wake up in the morning, head out of the house, get ready for bed or many of the other tasks we perform throughout the day.

Now, with Routine Suggestions, after someone engages with your Action, you can prompt them to add your Action to their routines with just a couple of taps.

So when I leave the house for work each morning, I can have my Assistant order my Americano from Starbucks and play that premium content from the Economist.

You can enable your Action for Routine Suggestions in the console today, and it will be working in production soon.

Before you run off and start sharing Actions links to all of your followers on social media, check out some of the other announcements we're making here at I/O:

Extend your experiences to the Google Assistant
We're delighted to see that many of you are starting to test the waters in this emerging era of conversational computing. If you're already building mobile or web apps but haven't tried building conversational Actions for the Google Assistant just yet, now is the perfect time to get started. Start thinking of the companion experiences that could be a fit for the Google Assistant. We have easy-to-follow guides and a community program with rewards and Google Cloud credits to get you up and running in no time. We can't wait to try out your Actions soon!