[Cross-posted from the Official Google Blog]

Just say the word Australia, and people immediately think of the elegant sails of the Sydney Opera House, jutting out into the water of Circular Quay. An Australian icon, this architectural wonder transcends its location. And starting today it’s easier for anyone, anywhere in the world to experience the many sights and sounds of this masterpiece, with the opening of the Sydney Opera House on the Google Cultural Institute.

The Google Cultural Institute provides a new digital home for the Sydney Opera House, bringing together more than 1,000 artefacts and 60 years of history in a single online platform. From architect Jørn Utzon’s early designs, to the inner workings of the world’s biggest mechanical organ, to spectacular late night shows, these 50 online exhibits capture the Sydney Opera House from every angle. 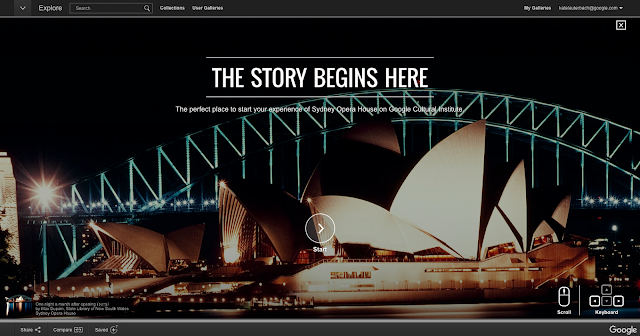 “The Story Begins Here” exhibit explores the history of the building, the performances and events that have taken place on Bennelong Point.
This new collection showcases the variety of culture on offer at one of the world’s busiest performing arts centres, and brings many treasures out of the archives and into the spotlight for people to appreciate. Some of the rare content includes photographs of the opening with Queen Elizabeth II in 1973, roof design sketches from master builder and lead engineer Ove Arup, the diaries of architect Peter Hall, and Utzon's personal collection of photographs from the project, spanning nearly a decade.

The sculptural elegance of the Opera House has made it one of the most recognisable buildings of the 20th century. In addition to exhibits which tell the stories of the history and development of this architectural masterpiece, today’s launch includes a brand new 360° experience offering insights into the between-the-acts magic of the House. Starting at dawn beneath the sails, you can continue on to enjoy incidental performances by Soprano Nicole Car and the Sydney Symphony Orchestra, and then journey to many seldom seen areas of the House.
See the Opera House as never before—from dusk till dawn in an immersive 360° experience
With new Street View imagery, you can virtually wander in and around the Opera House at your own pace, taking in stunning views from all angles. Gaze at the white sails overlooking Sydney’s picturesque harbour, feel what it’s like to stand on the Joan Sutherland Theatre stage and look up at the acoustic clouds of the Concert Hall.
The iconic acoustic clouds of the Sydney Opera House Concert Hall
The new collection opens today at g.co/sydneyoperahouse on the Google Cultural Institute website and is available for anyone on mobile phones, tablets and desktop computers. You can also view it via the new Google Arts & Culture mobile app from your iOS or Android device. We hope you enjoy experiencing the past, present and future of this World Heritage masterpiece.