Have you ever slashed the wind with your friends? Attached a gold leaf to the back of a Buddha statue? Or caught the moon in your hands?

You probably have, but if you don’t speak Vietnamese, Thai or Bengali you probably called it something else. These are some phrases Google Translate learned to understand a little better during the first of a series of translate-a-thons held over the last month in Bangladesh, Myanmar, Vietnam and Thailand, part of a “Love your Language” project to get languages better represented on the Web. (For those playing at home, the Vietnamese call it slashing the wind when they gossip, the Thais say they attach a gold leaf to the back of a Buddha statue when they do something selfless, and Bengalis say they’ve caught the moon in their hand when they receive something rare).

Google Translate provides free translation in 90 languages, but for those that don’t have much presence on the Web - like Myanmar, Bengali, Vietnamese and Thai - it could use a little help.

This is where the Translate Community tool and passionate language speakers can make a difference. By letting people validate, match, rate and supply translations, it can boost the translation of these languages online for millions of people.

Since kicking off on International Mother Tongue Day (21 Feb), more than 50,000 people have come together, online and off, to use this tool to improve translations for Bengali, Myanmar, Vietnamese and Thai. They gathered at startup hubs in Yangon and university campuses in Vietnam, Bangladesh and Thailand.

So far, more than 100 translate-a-thons have been held and more than 10 million words have been added. That's 17 times more words than Tolstoy used for War and Peace, 12 times the number of words in the English version of the Bible.

It's made a huge difference. The quality of Bengali translations are now twice as good as they were before human review. While in Thailand, Google Translate learned more Thai in seven days with the help of volunteers than in all of 2014.

The following graph show the spike in Translate Community inputs over the last month, March 26 saw a major spike for Bangladesh Independence day, setting a new record for the largest volume of translations contributed in 24 hours. 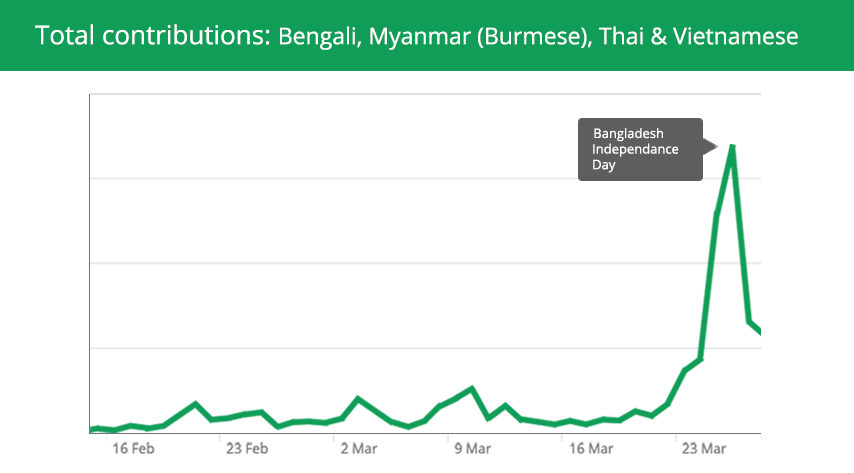 Google Translate Community surfaces a random selection of popular words and phrases that users are asking Google Translate to explain in their language — from music lyrics, to local recipes, to human rights.
Teaching Google Vietnamese at the University of Technology in Ho Chi Minh City We sometimes think the offline world and online world are separate. They're not. A huge thank you to all the people that joined us for the Love your Language series of events. Your efforts have made it easier for people from downtown Dhaka to upcountry Thailand to access the web in a language they understand.
And the improvements don’t need to stop. By joining the Translate Community you can join us in making the web work better for everyone — no matter what language you speak.