(Editor’s note: This is a guest post from Ben Jeffreys, Manager of the Biodigesters project for Engineers Without Borders Australia)

Like 85% of rural Cambodians, Long Sokhon made a modest living off the land. She grew rice along a one-hectare scar of earth where forest used to be. She tended two buffalo during the day and cooked for her family of eight over a wood-chip fire by night. Then, roughly one year ago, she was given the opportunity of having a 2,000 litre slate-grey tank installed in the vegetable patch behind her house. Sokhon was instructed to feed waste into an inlet at the top of the tank—in goes a daily bucket of buffalo dung; out comes biogas for cooking and lighting, and fertilizer with which to grow crops.

Long Sokhon was the final participant in her commune to be chosen as part of a biodigester pilot project. This project was set up by Engineers Without Borders Australia and Live & Learn Environmental Education Cambodia to address sanitation and energy issues in the flood-prone region around Cambodia’s Tonle Sap, with the support of Google Australia. 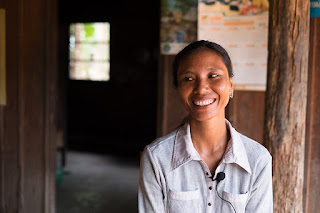 Long Sokhon was the final participant in her commune to receive a biodigester. Her health has increased significantly since she began cooking with biogas.
The Tonle Sap is South East Asia’s largest freshwater ecosystem. It’s also one of its most challenging from a sanitation perspective. There’s a 15 metre differential in the water level between wet and dry season each year—a fixed latrine that’s accessible in January is completely flooded come September. This means both human and animal waste enter directly into the water, causing significant health risks for the millions who depend on the lake for their day to day survival. The biodigester, used for strictly for sanitation purposes, is hardly a novel invention. But when viewed as an energy resource as well, the technology shows a tremendous amount of potential.

It’s the clean-burning biogas, a byproduct of the anaerobic digestion of waste within the tank, which has most early adopters of the EWB and Live & Learn program excited - especially in a wood-burning country where only 3% of the primary rainforest remains. In 2010 the World Bank published a report claiming only 26% of Cambodians have access to electricity. Rural Cambodians also pay one of the highest fees for grid power supply in the world. 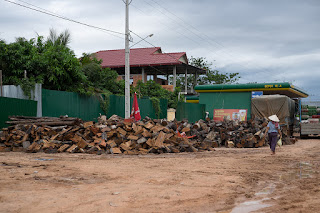 In the absence of biogas, most rural Cambodians cook with wood. One cubic metre sells along the roadside of Tompeang Chan commune for 25,000 riel (~ $8 AUD.)
Sin Saroun, who joined the biodigester program four years ago, pays 12,000 Cambodia real ($4 AUD) per kilowatt-hour—nearly 9 times what she would in rural Vietnam. Saroun has been able to cut down her electricity bill by unplugging the rice cooker. She now uses her time and electricity budget to watch a few hours on her black and white television each night. 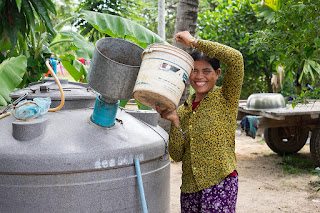 Sin Saroun illustrates how she feeds one bucket of buffalo dung into her biodigester per day. This provides enough biogas for her to cook three meals for her husband and four children.
Meanwhile, by switching to biogas, Sokhon has cut down her wood consumption by one third of a cubic metre every 10 days. Although most poor Cambodians elect to collect their own wood—a process that takes Sokhon up to four days per month—this same volume sells along the roadside for 25,000 riel ($8 AUD.)

Between 2008 and 2012 EWB and Live & Learn installed 30 biodigesters around the region. In an evaluation done 12 months prior to publishing this article, nearly all the devices were still in operation and the participants gave the technology a satisfaction rating of 92%. In 2014 the project was awarded a Google Impact Challenge grant of $500,000 AUD in order to scale the project into a locally run social enterprise. The goal is now to build a business that provides sanitation, energy and livelihood options to 1.2 million Cambodians by 2024.

In May this year I moved from Melbourne to Phnom Penh with the aim of building as much of the capacity and value chain as possible in country. Our real brand vision is around asking ourselves how many people we can reach with this technology. The biodigester program fundamentally aims to allow these communities to develop beyond mere subsistence.

At the moment, a major focus of the program is optimising the product’s value proposition. Maximising user uptake is a crucial component of addressing downstream sanitation affects. This is particularly important should the product go to market with a user-pay, rather than subsidies-based model. The current biodigester prototypes cost $450 USD per unit. Although this eventually pays itself off by reducing the user’s day-to-day cost, the upfront investment still stands at 1/3 of the annual rural Cambodia salary. We believe that an approximate two-year payback period, similar to current solar technology in Cambodia and Australia, seems reasonable.

The program to date is not without its minor criticisms from participants. One person would like to see a prettier tank—perhaps bright yellow. Another has recently sold two of her five buffalo to buy a tractor and has seen a drop in biogas yields as she adjusts to account for a reduced supply of biological waste. We are fishing for these pieces of critical feedback, eager to learn how to optimise our product. 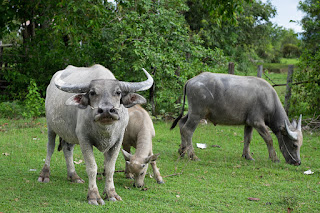 Both Long Sokhon and Sin Saroun use buffalo waste as the primary input for their biodigesters. Both add between one and two buckets per day.
But ultimately what we are hearing from people is the tangible improvements they’ve seen to their quality of life. Sokhon’s health has increased dramatically in the absence of the woodfire smoke that once caused her lungs to rattle and her head to ache. With the help of the organic fertilizer produced by her biodigester, Saroun’s rice and sesame crops now produce twice their normal annual yield. Sokhon estimates she saves up to 50,000 riel ($16 AUD) per month on medicine; Saroun, 900,000 riel ($299 AUD) per season on fertilizer. When asked where the two women invest their newfound time and energy they answer the same—to give their children an education and thus a better life.