Developers like you have built amazing scripts with Apps Script, and we want to make Apps Script even more useful. We've been working hard to add a variety of new APIs and features in Google Apps Script. Today, we're ready to share a few of them with you.

Named ranges are a popular feature of the Spreadsheet service; and now, you’ll be able to do something similar in the Document service. With named ranges, your scripts can tag a section of a Google Doc for later reference. For example, a bibliography script could set a named range on every citation in a document, then easily update the citations in the future. 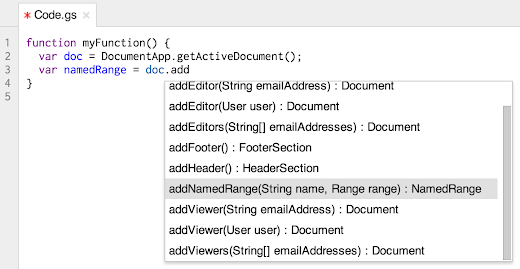 You can use a similar API to manage bookmarks, too. Unlike named ranges, bookmarks are visible to the user and allow you to link to a particular place in a document.

Also for Google Docs, we've added the server-side methods setCursor(position) and setSelection(range) to change the user's cursor position or active selection, plus a client-side method, google.script.host.editor.focus(), which switches the browser focus from a sidebar or dialog back to the document.

Oh, and hey: the Undo command in Google Docs can now revert changes made by a script.

If you've used HTML service much, you'll know that the Caja security sandbox has two modes. NATIVE mode imposes fewer restrictions than EMULATED mode and generally runs faster. As of today, NATIVE is now the default if you have not specified which mode your script should use. In a few edge cases, this may affect how existing web apps operate; if so, simply append .setSandboxMode(HtmlService.SandboxMode.EMULATED) to your HtmlOutput object to restore the old behavior.

We’re excited to bring you these new tools. With these new additions, we have also deprecated Finance service. It will remain available for the next six months but will be turned off on September 26, 2014.