Wait, what? Why is Google interested in plasma physics?

Google is always interested in solving complex engineering problems, and few are more complex than fusion. Physicists have been trying since the 1950s to control the fusion of hydrogen atoms into helium, which is the same process that powers the Sun. The key to harnessing this power is to confine hydrogen plasmas for long enough to get more energy out from fusion reactions than was put in. This point is called “breakeven.” If it works, it would represent a technological breakthrough, and could provide an abundant source of zero-carbon energy.

There are currently several large academic and government research efforts in fusion. Just to rattle off a few, in plasma fusion there are tokamak machines like ITER and stellarator machines like Wendelstein 7-X. The stellarator design actually goes back to 1951, so physicists have been working on this for a while. Oh yeah, and if you like giant lasers, there’s the National Ignition Facility which users lasers to generate X-rays to generate fusion reactions. So far, none of these has gotten to the economic breakeven point.

All of these efforts involve complex experiments with many variables, providing an opportunity for Google to help, with our strength in computing and machine learning. Today, we’re publishing “Achievement of Sustained Net Plasma Heating in a Fusion Experiment with the Optometrist Algorithm” in Scientific Reports. This paper describes the first results of Google’s collaboration with the physicists and engineers at Tri Alpha Energy, taking a step towards the breakeven goal.

Did you really just say that you got to fire a plasma collider?

Yeah. Tri Alpha Energy has a unique scheme for plasma confinement called a field-reversed configuration that’s predicted to get more stable as the energy goes up, in contrast to other methods where plasmas get harder to control as you heat them. Tri Alpha built a giant ionized plasma machine, C-2U, that fills an entire warehouse in an otherwise unassuming office park. The plasma that this machine generates and confines exhibits all kinds of highly nonlinear behavior. The machine itself pushes the envelope of how much electrical power can be applied to generate and confine the plasma in such a small space over such a short time. It’s a complex machine with more than 1000 knobs and switches, an investment (not ours!) in exploring clean energy north of $100 million. This is a high-stakes optimization problem, dealing with both plasma performance and equipment constraints. This is where Google comes in.
Wait, why not just simulate what will happen? Isn’t this simple physics?

The “simple” simulations using magnetohydrodynamics don’t really apply. Even if these machines operated in that limit, which they very much don’t, the simulations make fluid dynamics simulations look easy! The reality is much more complicated, as the ion temperature is three times larger than the electron temperature, so the plasma is far out of thermal equilibrium, also, the fluid approximation is totally invalid, so you have to track at least some of the trillion+ individual particles, so the whole thing is beyond what we know how to do even with Google-scale compute resources.

So why are we doing this? Real experiments! With atoms not bits! At Google we love to run experiments and optimize things. We thought it would be a great challenge to see if we could help Tri Alpha. They run a plasma “shot” on the C-2U machine every 8 minutes. Each shot consists of creating two spinning blobs of plasma in the vacuum sealed innards of C-2U, smashing them together at over 600,000 miles per hour, creating a bigger, hotter, spinning football of plasma. Then they blast it continuously with particle beams (actually neutral hydrogen atoms) to keep it spinning. They hang on to the spinning football with magnetic fields for as long as 10 milliseconds. They’re trying to experimentally verify that these advanced beam driven field-reversed plasma configurations behave as expected by theory. If they do, this scheme could lead to net-energy-out fusion.

Now 8 minutes sounds like a long time (which is the time it takes for C-2U to cool, recharge, and get ready for another 10 ms shot), but when you’re sitting in the control room during an experimental campaign, it goes by really quickly. There are a lot of sensor outputs to look at, to try to figure out how the plasma was behaving. Before you know it, the power supplies are charged again, and they’re ready for another go!

What was that about optimization? What are you optimizing?

That’s the thing, it’s not completely obvious what good plasma performance is. Of course, Tri Alpha has some of the world’s best plasma physicists, but even they disagree on what “good” is. We can boil down the machine controls to “only” 30 parameters or so, but when you have to wait 8 minutes per experiment, it’s a pretty hard problem even with a concrete objective. Also, it’s not entirely known, day-to-day, what the reliable operating envelope of the machine is. And it keeps changing since the quality of the vacuum keeps changing and electrodes wear out and...

So we boil the problem down to “let’s find plasma behaviors that an expert human plasma physicist thinks are interesting, and let’s not break the machine when we’re doing it.” We developed the Optometrist Algorithm, which is sort of a Markov Chain Monte Carlo (MCMC) where the likelihood function being explored is in the plasma physicist’s mind rather than being explicitly written down. Just like getting an eyeglass prescription, the algorithm presents the expert human with machine settings and the associated outcomes. They can just use their judgement on what is interesting, and what is unhealthy for the machine. These could be “That initial collision looked really strong!” or “The edge biasing is actually working well now!” or “Wow, that was awesome, but the electrode current was way too high, let’s not do that again!” The key improvement we provided was a technique to search the high-dimensional space of machine parameters efficiently.

I knew you’d like that bit. Using this technique, we actually found something really interesting. As we describe in our paper, we found a regime where the neutral particle beams dumping energy into the plasma were able to completely balance the cooling losses, and the total energy in the plasma actually went up after formation. It was only for about 2 milliseconds, but still, it was a first! Since rising energy due to neutral beam heating was not necessarily expected for C-2U, it would have been difficult to plug into an objective function. We really needed a human expert to notice. This was a classic case of humans and computers doing a better job together than either could have separately. You know how it is — when you think you have an optimization problem, and you optimize the objective, you usually just look at the result and say, “No no no, that’s not what I meant,” and you add some other term and repeat until you get sick of it?

That hasn’t happened to me. This week. Yet.

Yeah, so we just cut out that iteration and let the expert human use their judgment. This learning from human preferences is becoming a thing. Google and Tri Alpha made a pretty good team for it, for a really important problem.

So actually, Tri Alpha learned everything they could have from C-2U and then dismantled it. They built a new machine called Norman (after their late co-founder Norman Rostoker) in the same warehouse. It’s much more powerful both in plasma acceleration and in neutral particle beams. It also has a more sophisticated system to confine the plasma in the central region. The pressure vessel, accelerators, and banks of capacitors and power supplies cover the building’s concrete floor. 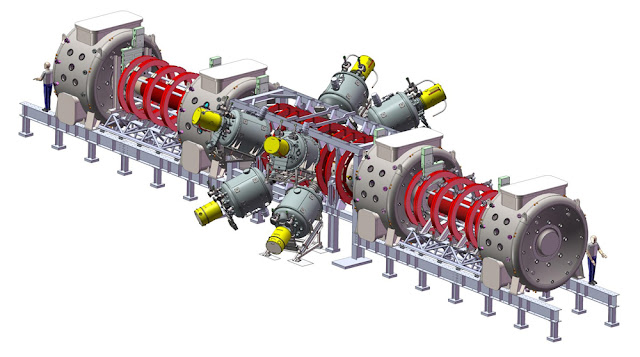 They just achieved “first plasma” on it. They’re hoping, with our help, to verify this theoretical prediction that the plasma will actually behave better in the “burning plasma” regime. If they can do that over the next 18 months, it will be a lot more likely that the field-reversed configuration is a viable approach for breakeven fusion. In that case, Tri Alpha will try to build their follow-on design, an actual demonstration power generator. That one won’t fit in their warehouse!

Acknowledgements
On the Google side, we wish to thank John Platt, Michael Dikovsky, Patrick Riley and Ross Koningstein for their significant contributions to this work. We thank the Google Accelerated Science team for their continual support. We are also grateful to the entire team at Tri Alpha for giving us the opportunity to try our hand at optimization for this crucially important problem.