PowerShell is a command-line shell and associated scripting language built on the .NET Framework. It's the default task automation and configuration management tool used in the Windows world. A PowerShell cmdlet is a lightweight command invoked within PowerShell.

Cloud Tools for PowerShell is a collection of cmdlets for accessing and manipulating GCP resources. It's currently in beta and allows access to Google Compute Engine, Google Cloud Storage, Google Cloud SQL and Google Cloud DNS —with more to come! For other services, you can still use the gcloud command line tool inside Google Cloud SDK Shell.


PowerShell cmdlets come as part of the Cloud SDK for Windows installation, so make sure that you’ve checked the PowerShell option when installing Cloud SDK.

If you want to add PowerShell cmdlets into an existing Cloud SDK installation, you’ll need to do a little more work.


Second, you need to register cmdlets with your PowerShell environment. This is done by running a script named AppendPsModulePath.ps1 (provided by Cloud SDK) in PowerShell. Depending on whether Cloud SDK was installed per user or for all users, you can find this script either in

As with any other Google Cloud APIs, you need to be authenticated before you can use cmdlets. Here's the gcloud command to do that:


Once authenticated, you're ready to use GCP cmdlets within PowerShell. Here’s an example of using Get-GceInstance cmdlet to list properties of a Compute Engine instance: 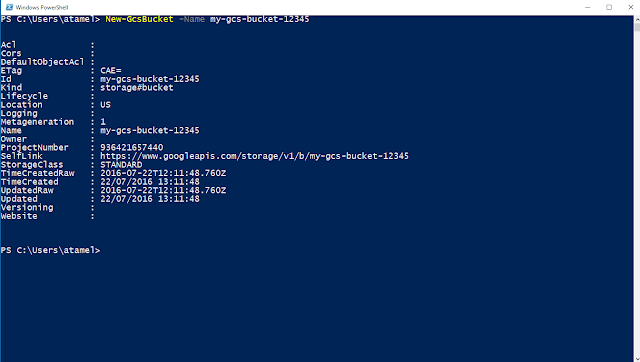 Here are some of the tasks you can perform with PowerShell cmdlets against a Google Compute Engine instance:


Some of the tasks you can perform against Google Cloud Storage are:

We also have guides on how to administer Google Cloud SQL instances and how to configure the DNS settings for a domain using Cloud DNS.

The full list of Cloud Storage cmdlets can be found here.

With Cloud Tools for PowerShell, .NET developers can now script and automate their Compute Engine, Cloud Storage, Cloud SQL and Cloud DNS resources using PowerShell. Got questions? Let us know. Bugs? Report them here. Want to contribute? Great! Care to be part of a UX study? Click here! We’re ramping up our efforts for Windows developers, and would love to hear from you about the direction you want us to take.