Readfeed was created to help book lovers around the world share and discuss their favorite reads with each other more easily. Today, we are excited to officially launch the Readfeed app on Google Play. As one of the first online book clubs available only on Android devices, Readfeed lets you create your virtual bookshelf by adding books to custom lists, track and share your reading progress with community members, and see what books others are reading and talking about. 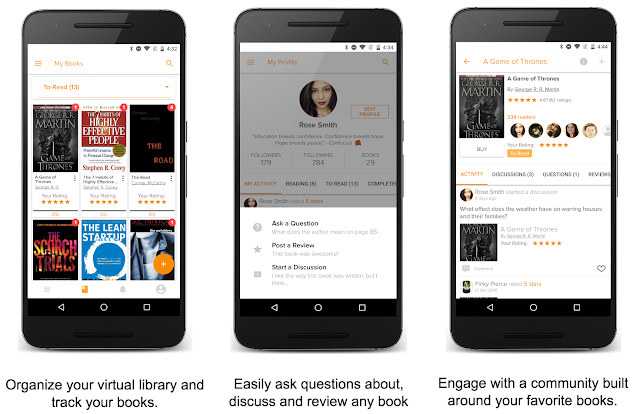 Readfeed has come a long way since we first released the app as beta in Google Play's Early Access program. As one of the first graduates of the beta program, we were able to solicit feature requests, identify bugs, locate new and optimize existing target markets, as well as build a sizable reader community. This allowed Readfeed to deliver the best possible experience right out of the gate.

As a guest on this blog, we thought it would be helpful to share some important best practices that we learned from the Early Access program to improve your products and scale your user base.

One of the core principles underlying the construction of any successful product is setting up an effective feedback loop between users and product creators. Google Play Early access does this automatically. Users show up (sometimes seemingly out of nowhere), install the app, and leave feedback in the Beta Feedback section of the developer console. We can then reply in that section or take the conversation into an email, address the issue, and email users when it's addressed. Many improvements to Readfeed have been made as a direct result of this process.

One major benefit of Early Access was that it gave us immediate access to a worldwide audience of readers. We were able to quickly assess the different book-related markets that existed based on user feedback and interviews done through email. Since launched in beta, over 1000 people have asked to read free books. Apparently this need exists in third-world countries and we plan to add this functionality in a future release.

Bugs plague any app in its early stages. Because of the variety of devices that Early Access users have, ranging from Android 4.2 rooted devices to the latest Nexus phones, we were able to identify bugs very quickly. For instance, on Android 4.2 there was a recurrent crash which was tough for me to identify with my own devices. After one user emailed me about it, I was able to gather enough information to resolve the issue and put out an update immediately.

Google Play Early Access made it a lot easier to determine what to do next. When about 10 people request a feature, we know it's immediately important and put it in the app. One feature that came directly from Early Access feedback was the ability to rate books without leaving a review.

Early Access has allowed us to start building a community. For instance, a Software tester from the UK who likes books sent me a detailed analysis of all of Readfeed's bugs. Also, we've witnessed many people take the initiative and answer others' questions about the app. Because of the critical mass that Google Play Early Access helps you build, it's easy for communities to form and start sharing information with each other.

We now have enough users to A/B test certain parts of the app and get statistically significant results. This is something that usually takes a long time to achieve.

There are many other ways Google Play Early Access have helped us, and we're thankful that Readfeed has had the opportunity to be a part of the program. I can say without reservation that our current and future product would be in a very different place had it not been for our inclusion in Early Access.