Africa is a hotbed of female entrepreneurship. Women make up 58% of small and medium-sized business (SMB) entrepreneurs on the continent. Despite those high rates of entrepreneurship, women-run businesses have, on average, 34% lower profits than those run by their male counterparts. They’re also less likely to receive funding and investment, to say nothing of the digital gender divide in access to internet connectivity, and a lack of financial security.
Just as closing the gender pay gap among the labour force leads to economic growth, so can closing the gap among entrepreneurs. As Africa looks to recover from the economic effects of COVID-19, fostering and supporting women entrepreneurs will thus be more important than ever.
Google has long been a supporter of women's entrepreneurship in Africa, and this is still a priority for us. As part of our celebration of International Women's Month in March, today we're launching an integrated campaign called #LookMeUp to spotlight and celebrate female entrepreneurs through their stories.

From founding a publishing company to providing a space to showcase culture to providing virtual mental health care during the Ebola outbreak, these women have inspired thousands through their work. Their circumstances and contexts might differ, but they all share a common tenacity and spirit.
Overcoming obstacles
For many women in Africa, the lack of financial stability is one of the biggest roadblocks to starting and sustaining a successful business. A 2021 research from the World Bank shows that only 3% of African VC funding has gone to all-female teams since 2013. That’s despite the fact that all-female teams make up 11% of the firms studied. One reason for this is that many small and medium-sized businesses lack the necessary skills to adequately pitch their businesses for financing or to discover potential sources of financial help. Recognising this, we have made skills development a major part of the #LookMeUp campaign through our Google Hustle Academy bootcamp series.
Throughout March, Hustle Academy will feature a women-only cohort to support women-owned small businesses grow by increasing revenue, positioning for investment, and building a sustainable business for the future. We will also be introducing new Primer mini-courses for women-led small and medium-sized businesses (SMBs). 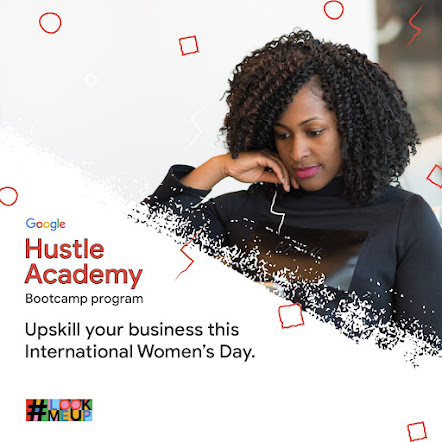 Both of these initiatives are in addition to our ongoing efforts towards improving skills development for African female entrepreneurs.


In addition to skills development, we will also be helping to improve the visibility of women-led African businesses through the #LookMeUp campaign. As part of this, we will be launching a drive for women to register their businesses on Google Business Profile. With consumers now also able to specifically search for women-led businesses around them, using the women-led attribute (for example, “women-led restaurants near me”), these businesses should be in a better place than ever when it comes to being found.

Waking up major potential
#LookMeUp is Google's latest initiative to support female entrepreneurs in Africa. Economic development and job creation are crucial, but so is decreasing gender disparity. Every piece of assistance we provide women-owned businesses builds on the previous one, and we will keep doing our bit to help women get equitable access to entrepreneurial opportunities.
Posted by Mojolaoluwa Aderemi-Makinde, Regional Head Brand and Reputation, Africa - Google
====