Over the course of the summer, we previewed a variety of security enhancements in Android 7.0 Nougat: an increased focus on security with our vulnerability rewards program, a new Direct Boot mode, re-architected mediaserver and hardened media stack, apps that are protected from accidental regressions to cleartext traffic, an update to the way Android handles trusted certificate authorities, strict enforcement of verified boot with error correction, and updates to the Linux kernel to reduce the attack surface and increase memory protection. Phew!

Now that Nougat has begun to roll out, we wanted to recap these updates in a single overview and highlight a few new improvements.
Direct Boot and encryption

In previous versions of Android, users with encrypted devices would have to enter their PIN/pattern/password by default during the boot process to decrypt their storage area and finish booting. With Android 7.0 Nougat, we’ve updated the underlying encryption scheme and streamlined the boot process to speed up rebooting your phone. Now your phone’s main features, like the phone app and your alarm clock, are ready right away before you even type your PIN, so people can call you and your alarm clock can wake you up. We call this feature Direct Boot.

Under the hood, file-based encryption enables this improved user experience. With this new encryption scheme, the system storage area, as well as each user profile storage area, are all encrypted separately. Unlike with full-disk encryption, where all data was encrypted as a single unit, per-profile-based encryption enables the system to reboot normally into a functional state using just device keys. Essential apps can opt-in to run in a limited state after reboot, and when you enter your lock screen credential, these apps then get access your user data to provide full functionality.

File-based encryption better isolates and protects individual users and profiles on a device by encrypting data at a finer granularity. Each profile is encrypted using a unique key that can only be unlocked by your PIN or password, so that your data can only be decrypted by you. 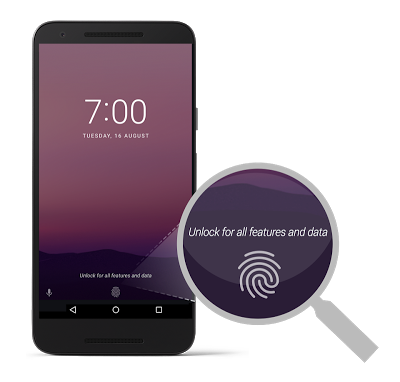 Encryption support is getting stronger across the Android ecosystem as well. Starting with Marshmallow, all capable devices were required to support encryption. Many devices, like Nexus 5X and 6P also use unique keys that are accessible only with trusted hardware, such as the ARM TrustZone. Now with 7.0 Nougat, all new capable Android devices must also have this kind of hardware support for key storage and provide brute force protection while verifying your lock screen credential before these keys can be used. This way, all of your data can only be decrypted on that exact device and only by you.
The media stack and platform hardening
In Android Nougat, we’ve both hardened and re-architected mediaserver, one of the main system services that processes untrusted input. First, by incorporating integer overflow sanitization, part of Clang’s UndefinedBehaviorSanitizer, we prevent an entire class of vulnerabilities, which comprise the majority of reported libstagefright bugs. As soon as an integer overflow is detected, we shut down the process so an attack is stopped. Second, we’ve modularized the media stack to put different components into individual sandboxes and tightened the privileges of each sandbox to have the minimum privileges required to perform its job. With this containment technique, a compromise in many parts of the stack grants the attacker access to significantly fewer permissions and significantly reduced exposed kernel attack surface.
In addition to hardening the mediaserver, we’ve added a large list of protections for the platform, including:
App security improvements
Android Nougat is the safest and easiest version of Android for application developers to use.
We’ve also continued to refine app permissions and capabilities to protect you from potentially harmful apps.
System Updates
Lastly, we've made significant enhancements to the OTA update system to keep your device up-to-date much more easily with the latest system software and security patches. We've made the install time for OTAs faster, and the OTA size smaller for security updates. You no longer have to wait for the optimizing apps step, which was one of the slowest parts of the update process, because the new JIT compiler has been optimized to make installs and updates lightning fast.
The update experience is even faster for new Android devices running Nougat with updated firmware. Like they do with Chromebooks, updates are applied in the background while the device continues to run normally. These updates are applied to a different system partition, and when you reboot, it will seamlessly switch to that new partition running the new system software version.
We’re constantly working to improve Android security and Android Nougat brings significant security improvements across all fronts. As always, we appreciate feedback on our work and welcome suggestions for how we can improve Android. Contact us at [email protected].