The JGroups messaging toolkit is a popular solution for clustering Java-based application servers in a reliable manner. This post describes how to store, host and manage your JGroups cluster member data using Google Cloud Storage. The configuration provided here is particularly well-suited for the discovery of Google Compute Engine nodes; however, for testing purposes, it can also be used with your current on-premises virtual machines.


JGroups versions 3.5 and later enable the discovery of clustered members, or nodes, on GCP via a JGroups protocol called GOOGLE_PING. GOOGLE_PING stores information about each member in flat files in a Cloud Storage bucket, and then uses these files to discover initial members in a cluster. When new members are added, they read the addresses of the other cluster members from the Cloud Storage bucket, and then ping each member to announce themselves.

By default, JGroups members use multicast communication over UDP to broadcast their presence to other instances on a network. Google Cloud Platform, like most cloud providers and enterprise networks, does not support multicast; however, both GCP and JGroups support unicast communication over TCP as a viable fallback. In the unicast-over-TCP model, a new instance instead announces its arrival by iterating over the list of nodes already joined to a cluster, individually notifying each node.

Configure your clustered application to use GOOGLE_PING

Now that you've created your Cloud Storage bucket and developer keys, configure your application's JGroups configuration to use the GOOGLE_PING class. For most applications that use JGroups, you can do so as follows:

Now GOOGLE_PING will use your Cloud Storage bucket and automatically create a folder that's named to match the cluster name.

Warning: By default, your virtual machines will communicate with your bucket insecurely through port 80. To set up an encrypted connection between the instances and the bucket, add the following attribute to the GOOGLE_PING element:

If you use JBoss Wildfly application server, you can configure clustering by configuring the JGroup subsystem and adding the the GOOGLE_PING protocol.

This section walks you through a concrete demonstration of GOOGLE_PING in action. This example sets up a cluster of Compute Engine instances that reside within the same Cloud Platform project, using their internal IPs as ping targets.

First, I start a sender application (using Vert.x) on a Compute Engine instance, making it the first member of my cluster:

Note: In general, you should bind to your Compute Engine instances' internal IP addresses. If you would prefer to cluster your instances by using their externally routable IP addresses, add the following parameter to your java command, replacing (external_ip) with the external IP of the instance:

When the application begins running, it displays "No reply," as no receiver nodes have been set up yet: 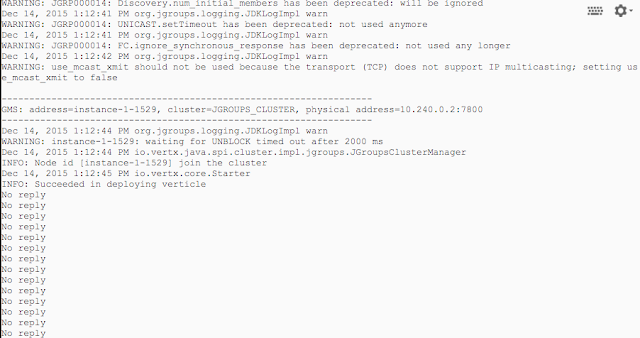 The .list file lists all of the members in the JGROUPS_CLUSTER cluster. In JGroups, the first node to start is designated as the cluster coordinator; as such, the single node I've started has been marked with a T, meaning that the node's cluster-coordinator status is true.

Next, I start a receiver application, also using Vert.x, on a second Compute Engine instance:

This action adds an entry to the .list file for the new member node:

Once the node has been added to the .list file, the node begins receiving "ping!" messages from the first member node: 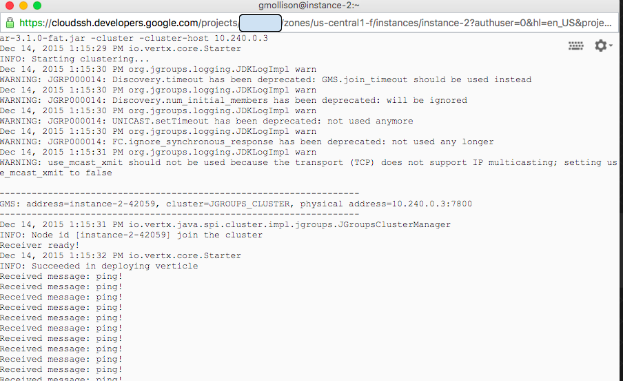 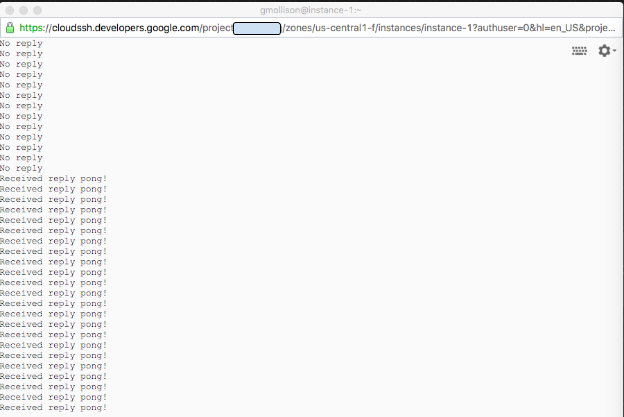 You can give GOOGLE_PING a try for free by signing up for a free trial.