By Kevin D. Kissell, Google Cloud Office of the CTO

Skylake raises the performance bar significantly, but a processor is only as powerful as the software that runs on it. So today we're announcing that the Intel Performance Libraries are now freely available for Google Cloud Platform (GCP) Compute Engine. These libraries, which include the Intel® Math Kernel Library, Intel® Data Analytics Acceleration Library, Intel® Performance Primitives, Intel® Threading Building Blocks, and Intel® MPI Library, integrate key communication and computation kernels that have been tuned and optimized for this latest Intel processor family, in terms of both sequential pipeline flow and parallel execution. These components are useful across all the Intel Xeon processor families in GCP, but they're of particular interest for applications that can use them to fully exploit the scale of 96 vCPU instances on Skylake-based servers.

Scaling out to Skylake can result in dramatic performance improvements. This parallel SGEMM matrix multiplication benchmark result, run by Intel engineers on GCP, shows the advantage obtained by going from a 64 vCPU GCP instance on an Intel® Xeon processor E5 (“Broadwell”) system to an instance with 96 vCPUs on Intel Xeon Scalable (“Skylake”) processors, using the Intel® MKL on GCP. Using half or fewer of the available vCPUs reduces hyper-thread sharing of AVX-512 functional units and leads to higher efficiency. 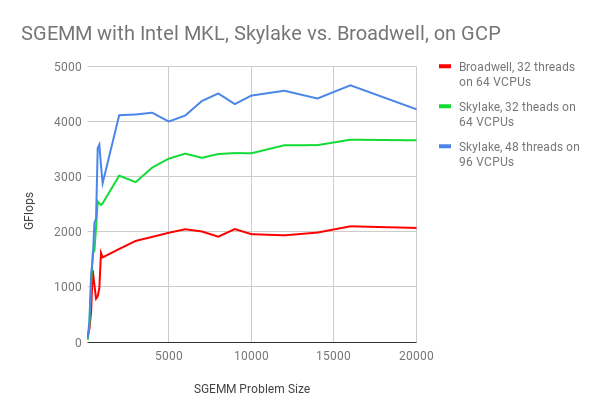 In addition to pre-compiled performance libraries, GCP users now have free access to the Intel® Distribution for Python, a distribution of both python2 and python3, which uses the Intel instruction features and pipelines for maximum effect. 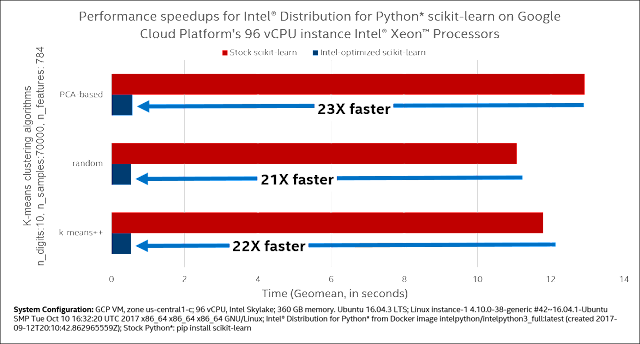 For more information about Intel and GCP, or to access the installation instructions for the Intel Performance Library and Python packages, visit the Intel and Google Cloud Platform page.