The new Search Console beta is up and running. We’ve been flexing our listening muscles and finding new ways to incorporate your feedback into the design. In this new release we've initially focused on building features supporting the users’ main goals and we'll be expanding functionality in the months to come. While some changes have been long expected, like refreshing the UI with Material Design, many changes are a result of continuous work with you, the Search Console users.
We’ve used 3 main communication channels to hear what our users are saying:
In one of these rounds we tested the new suggested design for the Performance report. Specifically we wanted to see whether it was clear how to use the ‘compare’ and ‘filter’ functionalities. To create an experience that felt as real as possible, we used a high fidelity prototype connected to real data. The prototype allowed study participants to freely interact with the user interface before even one row of production code had been written.

In this study we learned that the ‘compare’ functionality was often overlooked. We consequently changed the design with ‘filter’ and ‘compare’ appearing in a unified dialogue box, triggered when the ‘Add new’ chip is clicked. We continue to test this design and others to optimize its usability and usefulness. 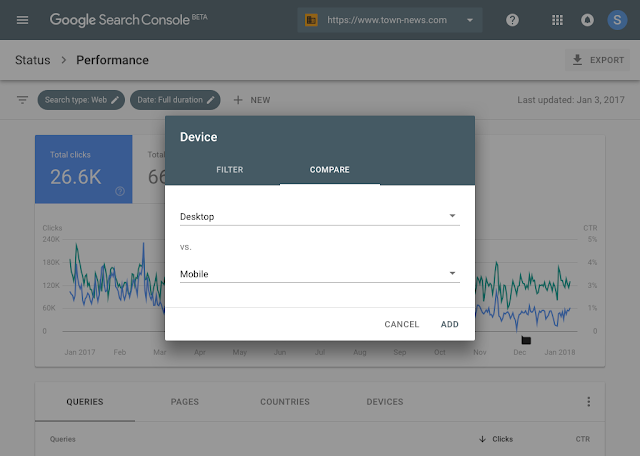 We incorporated user feedback not only in practical design details, but also in architectural decisions. For example, user feedback led us to make major changes in the product’s core information architecture influencing the navigation and product structure of the new Search Console. The error and coverage reports were originally separated which could lead to multiple views of the same error. As a result of user feedback we united the error and coverage reporting offering one holistic view.
As the launch date grew closer, we performed several larger scale experiments. We A/B tested some of the new Search Console reports against the existing reports with 30,000 users. We tracked issue fix rates to verify new Search Console drives better results and sent out follow-up surveys to learn about their experience. This most recent feedback confirmed that export functionality was not a nice-to-have, but rather a requirement for many users and helped us tune detailed help pages in the initial release.
We are happy to announce that the new Search Console is now available to all sites. Whether it is through Search Console’s feedback button or through the user panel, we truly value a collaborative design process, where all of our users can help us build the best product.
Try out the new search console.
We're not finished yet! Which feature would you love to see in the next iteration of Search Console? Let us know below.
Posted by the Search Console UX team