Hundreds of buzz bands and under-the-radar artists are in Austin this weekend for the South by Southwest (SXSW) festival—along with tens of thousands of music fans. But you don’t need to attend the festival to engage with SXSW. New data reveals that millions of passionate, interested music lovers are watching the festival on YouTube and on mobile devices.

Driven by mobile, U.S. viewership of SXSW content on YouTube grew by 62% in 2014. This presents a perfect opportunity for brands to reach SXSW fans beyond Austin’s city limits. As soon as people hear the festival buzz—the most surprising performances, the hottest new artists—they’re looking for content on YouTube, pulling out their smartphones more than ever before. Compared with viewership immediately after SXSW 2013, watchtime of video content from last year’s festival increased by 137% on mobile. 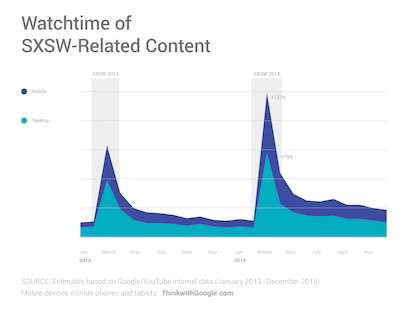 So brands know how fans are watching, but they also need to know who’s watching. You may not be surprised to learn that a large audience of young millennials watches SXSW content—but an older audience is beginning to follow the festival as well. In the last year, the 35–55-year-old age group has more than doubled its watchtime of SXSW videos.

Head to Think with Google for more stats about SXSW trends on YouTube, and find out how to reach these devoted music fans throughout the year.