Open source technology encourages collaboration and innovation to address real world problems, including projects supported by Google Cloud. As part of our broad engagement with the open source community, we’ve been working with HashiCorp since 2013 to enable customers who use HashiCorp tools to make optimal use of Google Cloud Platform (GCP) services and features.

Applications often require access to small pieces of sensitive data at build or run time, referred to as secrets. HashiCorp Vault is a popular open source tool for secret management, which allows a developer to store, manage and control access to tokens, passwords, certificates, API keys and other secrets. Vault has many options for authentication, known as authentication backends. These allow developers to use many kinds of credentials to access Vault, including tokens, or usernames and passwords.

As of today, developers on Google Cloud now have two authentication backends which they can use to validate a service’s identity to their instance of Vault:


With these authentication backends, it’s easier for a particular service running on Google Cloud to get access to a secret it needs at build or run time stored in Vault.

Fleetsmith is a secure cloud-based solution for managing a company’s Mac computers, that fully integrates with G Suite. They’ve been testing out the new Compute Engine metadata backend, and are currently using Vault on GCP for PKI and secret management. Learn more about how Fleetsmith did this in their blogpost.

“Fleetsmith and Google have shared values when it comes to security, and we built our product on Google Cloud Platform in part due to Google's high bar for security. We're excited about this new integration because it strengthens the security model for us as Google Cloud customers using Vault.”


You may already be running your own instance of HashiCorp Vault. Users can run Vault in either Compute Engine or Google Container Engine, and then use one of our new authentication backends to authenticate to Vault.


"Managing usernames, passwords and certificates is a challenge in a microservice world, where we have to securely manage many secrets for hundreds of microservices. WePay chose to use HashiCorp Vault to store secrets because it provides us with rotation, tight control and out-of-the-box audit logging for our secrets and other sensitive data. WePay runs Vault server infrastructure on Google Compute Engine for secret storage, key management and service to service authentication, for use by our microservice architecture based on Google Container Engine."


“As a strong contributor and supporter of free open source software with vital projects such as regressr and datameta, eBay is a user of Hashicorp’s software products, including vaultproject.io on the Google Cloud Platform.” 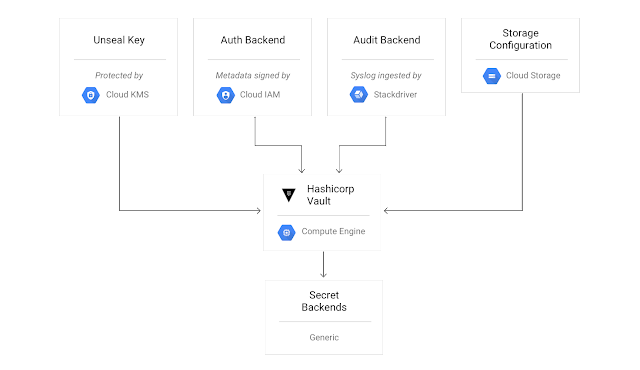 Using HashiCorp Terraform to manage your resources on Google Cloud

When you’re testing new code or software, you might want to spin up a test environment to simulate your application. HashiCorp Terraform is an infrastructure management and deployment tool that allows you to programmatically configure infrastructure across a variety of providers, including cloud providers like Google Cloud.

Google has released a number of Terraform modules that make working with Google Cloud even easier. These modules let you quickly compose your architectures as code and reuse architectural patterns for resources like load balancing, managed instance groups, NAT gateways and SQL databases. The modules can be found on the Terraform Module Registry.