Today we’re announcing another important update to our NoSQL database, Google Cloud Datastore. We’ve redesigned the underlying architecture that supports the cross-platform API for accessing Datastore outside of Google App Engine, such as from Google Container Engine and Google Compute Engine, dramatically improving performance and reliability of the database. This follows new and simpler pricing for Cloud Datastore, announced last week.

The new Cloud Datastore API version (v1beta3) is available now. You need to enable this API before you can use it, even if you previously enabled an earlier version of the API.

We’re also publishing a Service Level Agreement (SLA) for the API, which will take effect upon its General Availability release.

Now that v1beta3 is available, we’re deprecating the old v1beta2 API with a six-month grace period before decommissioning it on September 30th, 2016.

In the new release, we re-architected the entire serving path with an eye on performance and reliability. Cloud Datastore API revision v1beta3 has lower latency in both the average and long tail cases. Whether it’s magical items transferring to a player’s inventory faster, or browsing financial reports on a website that’s snappy — everyone loves fast. 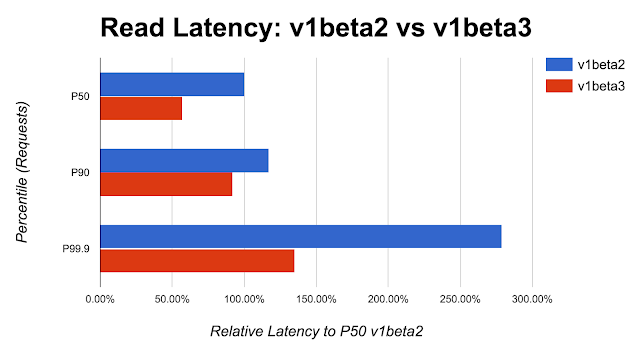 In addition to these significant performance improvements, the v1beta3 API gives us a new platform upon which we can continue to improve performance and functionality.

You can use v1beta3 using the idiomatic Google Cloud Client Libraries (in Node.js, Python, Java, Go, and Ruby), or alternatively via the low-level native client libraries for JSON and Protocol Buffers over gRPC. You can learn more about the various client libraries in our documentation.

If you're using the Google Cloud Client Libraries, upgrading is as simple as updating the client libraries from GitHub. We look forward to what you build next with our faster cross-platform API for Cloud Datastore.

To learn more about Cloud Datastore, check out our getting started guide.