Starting on September 26th, 2016, we will add two additional APIs to the recently launched External Directory Sharing Admin console setting. The setting is already enforced in the Google People API, and we will now also enforce it in Google CardDAV APIand Google Contacts API v3.

The setting gives Google Apps admins more control over their domain directory data, allowing them to determine what directory information external apps and APIs can access.

Admins can manage the setting from Apps > Google Apps > Settings for Contacts > Advanced Settings in the Admin console. 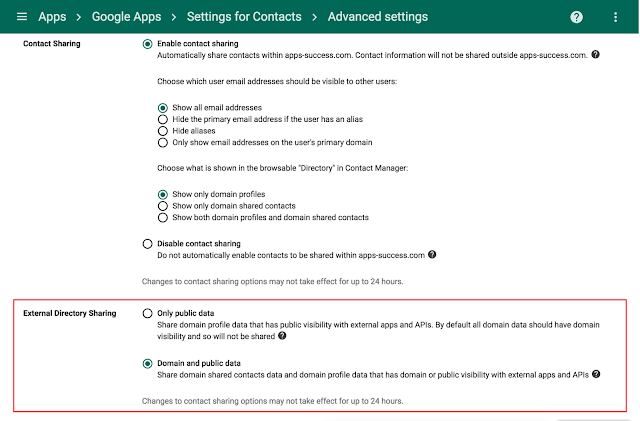 If admins have chosen to share “Only public data” from the Admin console, here are some common use cases that may become restricted by these new sharing controls:
Google Apps products that use the domain directory data for contacts, such as the Gmail, Drive, and Calendar apps on iOS, will not be affected by this change. Also not impacted by this change are the Google Apps Sync for Microsoft Outlook® sync plug-in and any device that syncs using Google Sync, both of which will continue to be able to access directory information even if the External Directory Sharing setting is set to “Only public data.” The Google Apps Admin SDK, used by admins to manage users and domain shared contacts, is also unaffected by the External Directory Sharing setting.