Editor's note: This blog was guest written by Natasha Henry, a historian and educator. She is the author of Emancipation Day: Celebrating Freedom in Canada and Talking about Freedom: Celebrating Emancipation Day in Canada. Natasha is also the president of the Ontario Black History Society.

"Freedom is the most precious of our treasures, and it will not be allowed to vanish so long as men survived who offered their lives for it." ~ Paul Robeson

August 1st, 2021 marks the 187th Emancipation Day, which is also known as August First and West India Day. The occasion recognizes the legal abolition of slavery in the British empire on August 1st, 1834. The legislation, the Slavery Abolition Act, applied to most British colonies, including Canada, where the last vestiges of enslavement were nearing the end after gradual abolition in Ontario. For some who remained in a state of forced servitude through apprenticeships in the Caribbean, freedom was delayed for four more years until August 1st, 1838.
The day became an instant occasion of celebration for the formerly enslaved and later by their descendants. Emancipation Day is a longstanding Black tradition for Black peoples. Some white Canadians and First Nations people observed and participated in solidarity. It has been commemorated across Canada from Nova Scotia to British Columbia at different points in time, through to today. August First was marked with church services, speakers, parades with marching bands and floats, performances, banquets, toasts and resolutions, outings, leisure activities, and protest. The commemoration was filled with symbols and imagery, messages of uplift and Black collective self-determination, and demands of racial justice.
The street parades, like today’s public demonstrations, were an important site for Black Canadians. They celebrated, gathered in camaraderie, and exercised resistance in the main streets of towns and cities. Black people dressed in costumes and regalia and carried signs and banners. Dignitaries, community leaders, war veterans, and performers led the processions.
In 1967, the roots of Emancipation Day celebrations influenced the creation of Caribana in Toronto. Introduced as part of the programming for Canada’s centennial celebration, Caribbean immigrants shared the forms of observing Emancipation Day and freedom through carnival to the establishment of this popular African Canadian festival. The floats and costumes created a spectacle of colour heavily influenced by African motifs and Black cultural symbols. They played music, sang songs, and danced. 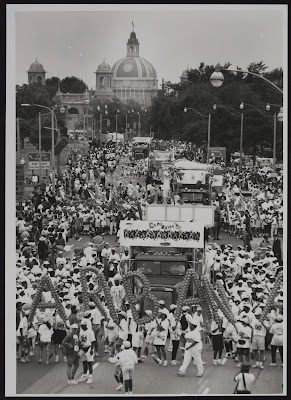 Black men and women planned and organized Emancipation Day events for small and large crowds, welcoming people who travelled by all means to come together. The Big Picnic at Port Dalhousie and the Greatest Freedom Show on Earth in Windsor were the two largest Emancipation Day events in the 20th century. The day was observed with both formal programming and in more relaxed settings with family reunions or homecomings. Emancipation Day commemorations were an interweaving of faith, thanksgiving, education, family, remembrance, resistance, community, hope, and promise.

The Greatest Freedom Show on Earth - The Story of Walter Perry from RJ Huggins on Vimeo.

A consistent element of Emancipation Day was protest and the persistent pursuit of freedom and citizenship. Black communities raised the issues of segregated schools, limited employment opportunities, housing restrictions, their ability to exercise their right to vote, the denial of business services and access to public facilities, and racial discrimination in other areas of Canadian society. They identified demands, set agendas to make their concerns known, and pursued redress.
Freedom is the core theme and over time, it has been defined in different ways. Freedom is a process. Those who secured their freedom from enslavement through various avenues actively constructed and practiced freedom. Descendants of the enslaved have continued to define and demand freedom. Along with the underlying theme of freedom, there were other themes and messages of culture, community, resistance and pride, creatively woven into the occasion.
We continue to be on the way to freedom as we face racial inequities entrenched in the legacies of racial slavery. Full freedom remains elusive for the descendants of the Transatlantic slave trade because the racial hierarchies and ideologies formed out of slavery persists to this day. This reality was brought to the world stage last year with the social unrest that spread globally. Emancipation Day signifies an integral component of the historical and ongoing movement for Black lives.
Earlier this year, Bill M-36 passed in the House of Parliament by unanimous consent, declaring that August 1st will be nationally recognized as Emancipation Day. It is an opportunity to strengthen the ties between Black Canadians across the country and to celebrate together, to carry on the long held, rich, cultural tradition of our ancestors.
The national stage should raise awareness among all Canadians about our country’s own history of slavery and systemic anti-Black racism. An integral part of increasing public education must include the integration of mandated learning expectations in curriculum in every province and territory that acknowledges the 400-year presence of people of African descent in Canada. It should also be utilized as a platform to hold governments to account. I applaud this step and the efforts to make it happen. I don’t want this national acknowledgement to receive just symbolic recognition and performative platitudes. It should be seen as another platform to agitate for real, impactful policy changes for Black Canadians.
In researching and writing about Emancipation Day, I have learned even more about the lives, experiences, struggles, and contributions of Black people across this country. It is a history to celebrate and to honour year-round. My experience has also inspired me to keep the flames of freedom alive for younger generations.
Join the Ontario Black History Society for our annual Emancipation Day Event on Sunday, August 1st at 6pm: https://goo.gle/3BXGcok.
The National Film Board of Canada offers a selection of films exploring Canada's history of slavery and racism to watch this Emancipation Day.