The first step of almost every connection on the internet is a DNS query. A client, such as a smartphone, typically uses a DNS server provided by the Wi-Fi or cellular network. The client asks this DNS server to convert a domain name, like www.google.com, into an IP address, like 2607:f8b0:4006:80e::2004. Once the client has the IP address, it can connect to its intended destination.

When the DNS protocol was designed in the 1980s, the internet was a much smaller, simpler place. For the past few years, the Internet Engineering Task Force (IETF) has worked to define a new DNS protocol that provides users with the latest protections for security and privacy. The protocol is called "DNS over TLS" (standardized as RFC 7858).

Like HTTPS, DNS over TLS uses the TLS protocol to establish a secure channel to the server. Once the secure channel is established, DNS queries and responses can't be read or modified by anyone else who might be monitoring the connection. (The secure channel only applies to DNS, so it can't protect users from other kinds of security and privacy violations.)

DNS over TLS in P 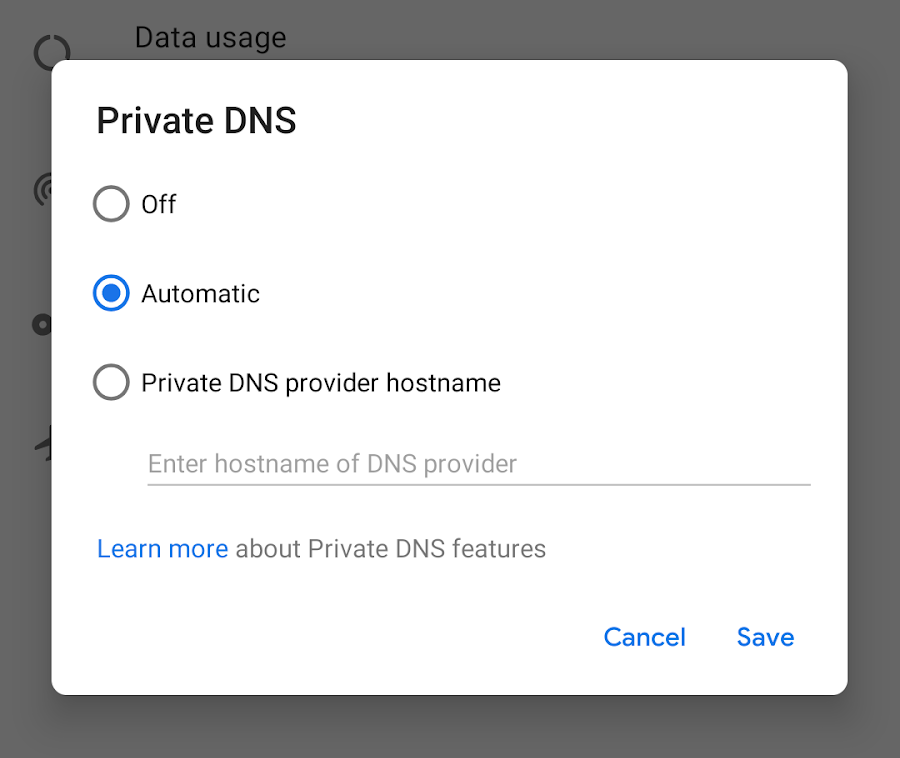 The Android P Developer Preview includes built-in support for DNS over TLS. We added a Private DNS mode to the Network & internet settings.

By default, devices automatically upgrade to DNS over TLS if a network's DNS server supports it. But users who don't want to use DNS over TLS can turn it off.

Users can enter a hostname if they want to use a private DNS provider. Android then sends all DNS queries over a secure channel to this server or marks the network as "No internet access" if it can't reach the server. (For testing purposes, see this community-maintained list of compatible servers.)

DNS over TLS mode automatically secures the DNS queries from all apps on the system. However, apps that perform their own DNS queries, instead of using the system's APIs, must ensure that they do not send insecure DNS queries when the system has a secure connection. Apps can get this information using a new API: LinkProperties.isPrivateDnsActive().

With the Android P Developer Preview, we're proud to present built-in support for DNS over TLS. In the future, we hope that all operating systems will include secure transports for DNS, to provide better protection and privacy for all users on every new connection.