On Wednesday, September 25, 1,500 people gathered at Fox Studios in Sydney for our YouTube Festival -- an immersive showcase of the most loved content on YouTube. It was an evening of live performances, featuring a selection of Australia’s favourite creators and musicians, as well as some fun announcements.

YouTube Festival explored the major shifts that online video is causing in entertainment and culture at large. Right now, we’re at the centre of the biggest change happening in how people around the world watch video content.

The rise of online video means viewers now demand the freedom to watch whatever they want, whenever they want, wherever they are, on any device. This means primetime is no longer a single time of day, it is now personal -- tailored to people’s unique needs, schedules and curiosities.

Ashley Chang is a Culture and Trends Manager at YouTube, and has spent hundreds of hours watching videos on YouTube. On the night, he explained what we’re seeing as ‘primetime’ shifts and shared some of the things he’s learned about culture from all those hours of watching videos. This is an abridged version of his speech.

I must have everyone’s dream job. I get to watch YouTube videos for a living. But I do this to try to understand popular culture, by understanding what's popular on YouTube. 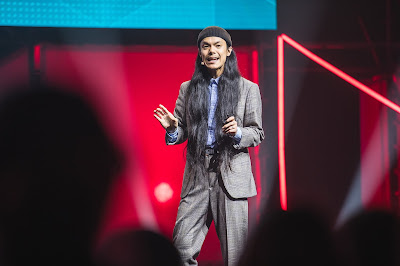 Ash Chang talks about modern video culture and creativity at YouTube Festival.
Online video helps us learn more about the world around us. It helps us connect with others who share our experiences and interests, no matter how niche. It entertains us and feeds our curiosity.

But before I talk about trends or the future, let’s chat about the past.
Do you know what the Voyager Golden Records are? They are two phonograph records that were launched into space aboard both Voyager spacecraft in 1977 -- and they’re a kind of time capsule designed to communicate the breadth and diversity of human civilization to any alien who might find it. To do that, these records were encoded with 115 images chosen by NASA, covering science, nature, sport, music and family.

Now, I only mention this because if aliens came down to earth right this very second and asked us to communicate the entire story of human civilization, there's only one place I'd take them. This place, obviously. A place where people from every corner of the world share their passions, their stories and their interests every single day. Be it science, nature, sport, music or family.

What I hope this illustrates, is that it’s not our stories that have changed. It’s our storytelling. The way that we tell and consume stories is getting more and more personalised for all of us. As I mentioned earlier, primetime is now personal. More personal than ever, and in the interest of getting personal myself I wanted to share with you my primetime.

If you look at my subscriptions feed, I’m interested in the NBA, tech, philosophy, film and television. But if you look closely you’ll notice that I’m particularly interested in one topic -- and that’s dancing. 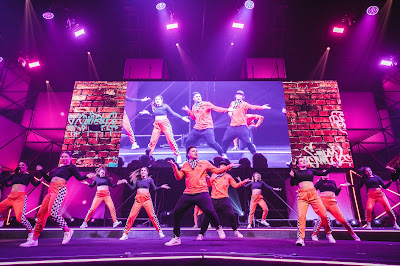 Jayden Rodrigues (one of the dance channels Ash subscribes to) and his crew performing at YouTube Festival.
I love to watch dance class videos. In fact, I love this content so much that I got off the couch, out of the house and into a dance class. I now go to dance classes five days a week because of YouTube. First it helped me find my passion, then it helped me amplify it. And now it’s come full circle with a dance class I was a part of earlier this year, now on YouTube.

I’m telling you this because I think it illustrates a good point. The beauty of YouTube is that whatever dancing is for you, whatever it is you are personally passionate about, it exists here.

Niche is the new mainstream
A platform like ours creates the conditions under which diversity can flourish. And that’s a good thing because that means that the niche can now become mainstream.

This is a place where a creator like Tourettes Teen can in her own words “spread awareness about Tourettes as well as joy and laughter.” I think you’ll agree she does both in TOURETTES vs EGG.

It’s a place where a creator like Primitive Technology, who wordlessly builds structures in nature, can gain almost 10 million subscribers with zero promotion. This is what happens when your addressable audience shifts from 25 million Australians to two billion global monthly active users. Think about it, no media executive in the world would ever commission this as a TV show and yet, it is one of the most popular channels on YouTube -- and that’s because on this platform value isn’t decided by any one person. It’s decided by all of us.

It’s a place where ASMR -- Autonomous Sensory Meridian Response or whisper videos -- seemingly the most fringe thing on the internet can explode in popularity. From 2017 to 2018, uploads and views of videos related to ASMR more than doubled. And it keeps getting bigger.

Earlier this year, ASMR appeared in what is perhaps the most mainstream thing there is -- a Super Bowl ad. But then again that shouldn’t surprise us at all because Captain Morgan has made ASMR videos, and so has Louis Vuitton and Vice Magazine -- all for YouTube.

But YouTube isn’t just a place for content that’s seemingly fringe, mainstream culture lives here too, and it is deeper and it is richer than you could ever imagine.

In its final season run, Game of Thrones related content netted 1.2 billion views across YouTube throughout April, including episode breakdowns, cast interviews, video essays and reaction videos. Content that went wider AND deeper on the tentpole cultural moments that audiences care about.

One of the most viewed videos of last year was the breakup announcement of two of the platform’s biggest stars -- Liza Koshy and David Dobrik.

During Pride Month this year we saw creators redefine the coming out video with content that was artistic, and moving and deeply, deeply personal. Eugene Yang, best known as a member of The Try Guys, came out by directing, choreographing and starring in this achingly vulnerable music video.

And Korean beauty blogger Dawn Lee uploads makeup tutorials alongside vlogs detailing her battle with cancer. This video -- which shows her shaving her head after chemotherapy -- is the most viewed video on her channel.

These are unvarnished, unarmored, unfiltered representations of self. Not only can that be incredibly moving for those watching it, it can be revolutionary for those revealing it.

What YouTube is is an empathy machine. It allows the lived experience of others to be known. What the audience is saying is ‘don’t show us your perfect life, show us your actual life’. Increasingly, our culture is moving away from perfectionism in favour of authenticity, accessibility and relatability, and perhaps no creator embodies those ideals more than Joana Ceddia -- a young Canadian vlogger who is part of a growing wave of creators who aren’t trying to be anything but themselves. She’s smart, funny and kind of dorky, but most of all she’s authentic. She’s amassed over 2.8 million subscribers in just over a year and it’s really not hard to see why.

So think of fame as we used to know it. Old school Hollywood, right? Stars pretty much exist in magazines or movies, or in their mansions, that's it. There's this distance between us and this is how we used to define celebrity -- through this otherness and exclusiveness.

But now, on YouTube at least, it's the exact opposite. Stardom is defined by proximity. In so many ways -- for one the camera is literally closer to their faces, but we're also closer in the sense that they’re not emotionally distant. We see them cry. We see what they look like when they've just woken up. We meet their parents. We watch them eat food. We know what their bedrooms look like.

Old school stars spent a lot of time shielding their private lives from the public. New school stars do the opposite -- they invite us in.

Traditional Genre Constructs are Outdated
We’re seeing stars from traditional media show less filtered versions of themselves through these new forms of storytelling. One of the most popular shows on YouTube involves celebrities eating increasingly spicy chicken wings. It’s called Hot Ones and it’s an interview series that’s not so much about the interview as it is about seeing celebrities in genuine discomfort.

In this new climate Rihanna makes beauty tutorials. Will Smith vlogs. And Ryan Reynolds gets involved in viral challenges -- this one is called the bottle cap challenge and basically involves trying to unscrew a bottle cap with your foot.

But this isn’t just a place where the niche becomes mainstream. Here, the mainstream can also become niche. Let me show you what I mean.

Billie Eilish, a 17 year old singer songwriter from Los Angeles, is one of the biggest pop stars in the world today. This is the music video for Billie’s hit song ‘bad guy’, which has over 550 million views on YouTube.

The Rapidly Evolving Content Proposition
Clearly, what content is, that is, how we categorise it, is far less important than what it does. That is, how it makes us feel. What value does it provide to its audience?

On YouTube, value can manifest in really interesting ways. For example, here’s how Margot Robbie uses YouTube for her own unique purposes. Then there’s more typical usefulness like recipe videos, workout videos and guided meditation. Content that functions as legitimate tools for self care and betterment.

Meet an amazing young woman, Macinley Butson. She’s a teenage scientist who invented a shield to help reduce radiation exposure for breast cancer patients. And to help her do that, she did what any young person would do -- she turned to YouTube. 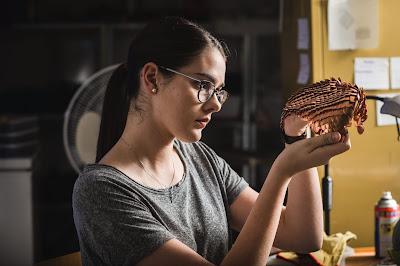 Macinley Butson with her SMART Armour invention.
It’s not enough to say YouTube democratises education, it actually democratises knowledge. As Macinley proves, the right vision combined with the right sound, received at the right time, can be transformative. It can help lives. It can change lives. It can even change the course of history.

Ultimately, what I want you to take away is that in culture right now: niche is the new mainstream, authenticity rules, traditional genre constructs are outdated and the value proposition of content is rapidly evolving. Put another way this is the what, who, how and why of cultural value.

So then, what is YouTube? Is it entertainment? Is it education? Is it inspiration? It’s kind of everything. It’s this continuous time capsule, this living, breathing artefact of humanity. To my mind, it’s no less than modern history unfurling in real time.

It’s the new Golden Records. The record of who we were, who we are and who we want to be. The record of everything that makes us special. Our ingenuity, curiosity, spirit, creativity, our love.

YouTube’s mission is to give everyone a voice and show them the world, but YouTube isn’t a world. It’s a universe. And the beauty of that is that for every single person, your very own universe awaits.