IBM launched the first smartphone only 20 years ago. Nicknamed Simon, it weighed more than a half a kilo, cost more than EUR1400 in today’s money, and lacked a touch screen or web browser.

Today, at a Lisbon Council event in Brussels, The Boston Consulting Group released a new study we commissioned showing that, fueled by stiff competition, the mobile Internet economy in the Europe’s five largest economies generates annual revenue of EUR92 billion -- encompassing sales of devices, access, advertising, and everything you do on the mobile web. This slice of the economy has also created 250,000 jobs in Germany, the UK, France, Italy, and Spain. 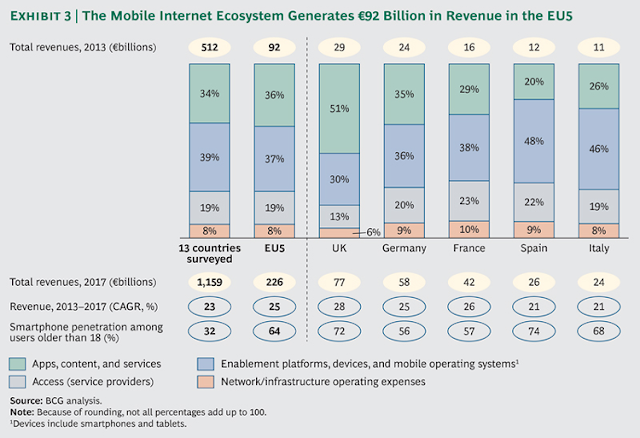 Courtesy of BCG 2014
By 2017, mobile revenue in these five countries will have more than doubled to about EUR230 billion - an annual growth rate of more than 25 percent. This boom doesn’t come from rising prices. To the contrary, it’s propelled by increasing affordability and accessibility. The average selling prices for smartphones in Europe are projected to fall almost 38 percent by 2017. 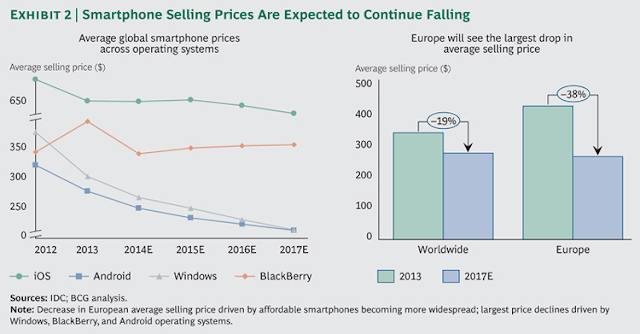 Courtesy of BCG 2014
Importantly, BCG found competition occurring “at every layer of the mobile ecosystem - among service providers, enablement platforms and companies providing apps, content and services.” Competition is particularly intense among phone manufacturers and operating systems. As recently as 2010, the BlackBerry and Symbian platforms accounted for almost half of smartphone sales; today they represent less than five percent. Apple’s iOS, Google’s Android, and Microsoft’s Windows are locked in fierce competition, while new entrants include Amazon’s Fire, Xiamo MIUI, Firefox OS, and Tizen. 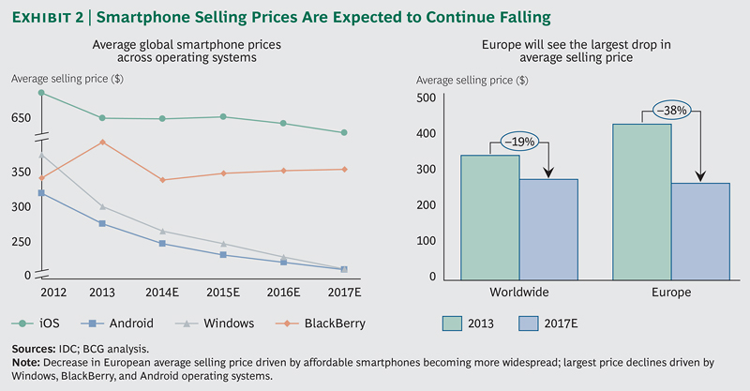 Courtesy of BCG 2014
A big part of this success story is the flourishing app economy. More than 100 billion downloads took place in 2013 around the globe - about 20 billion in the European Union. Leading app store operators paid developers more than EUR12.2 billion between June 2013 and July 2014. Many of the world’s most dynamic app developers and mobile game operators are based here in Europe, including Finland’s Rovio, the developer of Angry Birds, UK-based Shazam, Wooga in Germany, and Sweden’s Spotify.

All told, the mobile economy is driving economic growth and jobs. The mobile web informs, entertains, and helps us navigate the world. I have no doubt that further innovation and new growth opportunities will mark mobile’s next 20 years!