We all know that the holiday season is one of the most important and competitive times of the year for the retail industry. There are lots of consumers in the market who are ready to make a purchase, so for Cardstore, a part of American Greetings, it was important to be top of mind with these audiences. The team wanted to break the mold of their traditional approach; they were ready to innovate in order to build awareness and engagement, and turned to Google and YouTube for an effective solution.
With this goal in mind, the company made a swift decision to reallocate dollars from their typical marketing plan to fund their first ever YouTube homepage masthead. This masthead included two panels that consumers could switch between, one to showcase an online video ad and another with a carousel showcasing products from Cardstore. 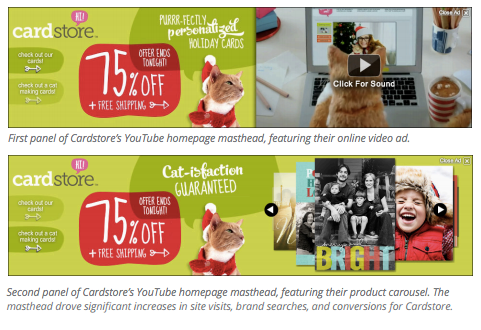 This creative approach drove a huge number of impressions for Cardstore. As Tim Walter, Senior Marketing Manager at American Greetings, described, “It was a very high profile placement on a well-known brand property. You can’t replicate the traffic you’re going to get on that day.” And beyond just impressions, a 2013 YouTube Homepage Impact research study conducted by Compete also proved that Cardstore saw significant improvements in site visits, brand searches, and conversions following the masthead:

These strong results helped the team to expand their thinking and consider new strategies. “The success we had with this placement gets us even more excited to try new things with YouTube going forward,” Tim asserted. “We believe YouTube can do good things for us and be a big part of our future success.