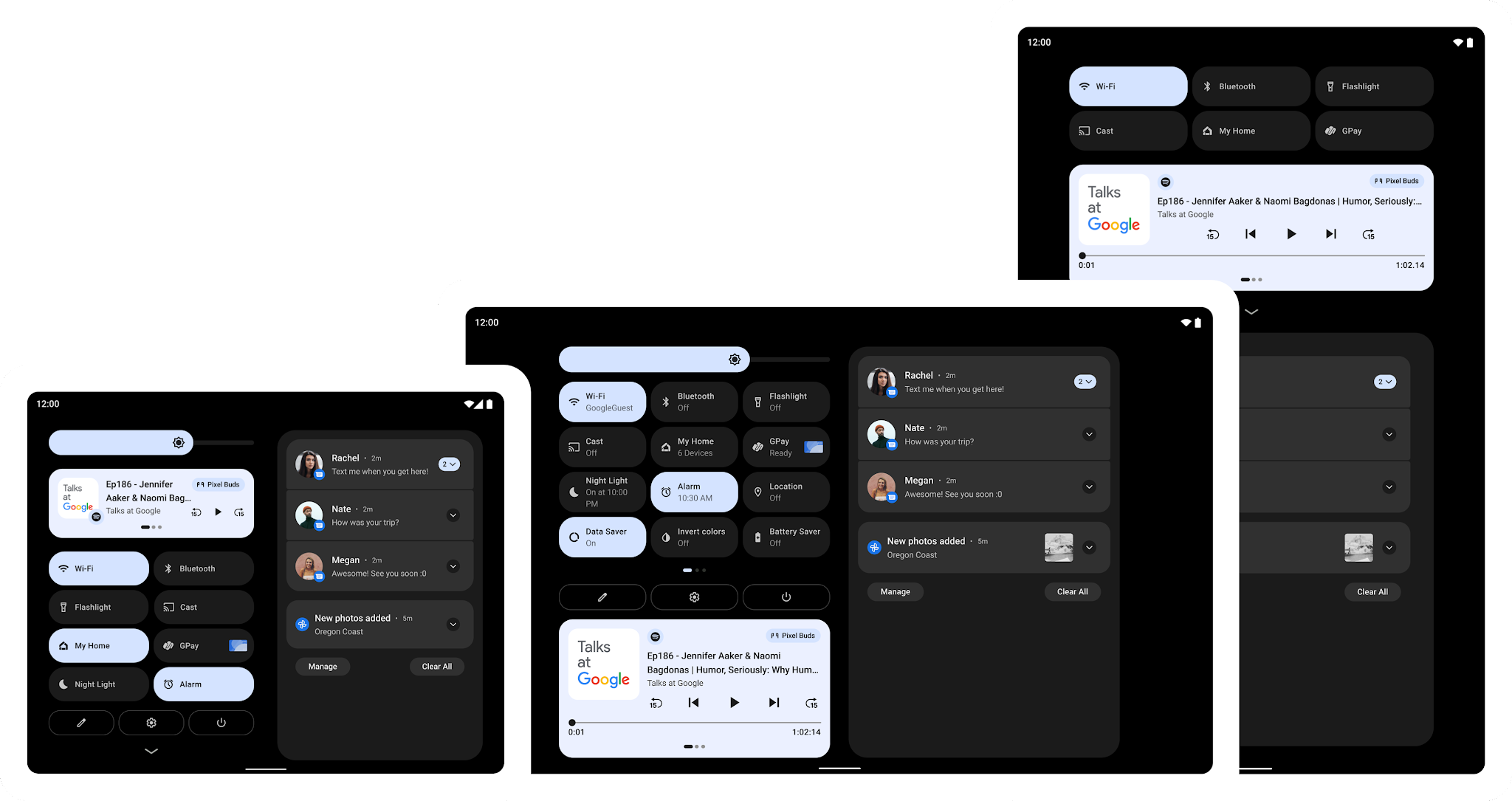 At Android Dev Summit in October we highlighted the growth we’re seeing in large screen devices like tablets, foldables, and Chromebooks. We talked about how we’re making it easier to build great app experiences for these devices through new Jetpack APIs, tools, and guidance. We also introduced a developer preview of 12L, a feature drop for Android 12 that’s purpose-built for large screens.

With 12L, we’ve optimized and polished the system UI for large screens, made multitasking more powerful and intuitive, and improved compatibility support so apps look better right out of the box. 12L also includes a handful of new APIs for developers, such as for spatial audio and improved drag-and-drop for accessibility.

Today we’re releasing the first Beta of 12L for your testing and feedback as you get your apps ready for the feature drop coming early next year. You can try the new large screens features by setting up an Android emulator in Android Studio. 12L is for phones, too, and you can now enroll here to get 12L Beta 1 on supported Pixel devices. If you are still enrolled in the Android 12 Beta program, you’ll get the 12L update automatically. Through a partnership with Lenovo, you can also try 12L on the Lenovo Tab P12 Pro tablet, see the Lenovo site for details on available builds and support.

Today’s Beta 1 build includes improvements to functionality and user experience as well as the latest bug fixes, optimizations, and the December 2021 security patches. For developers, we’ve finalized the APIs early, so Beta 1 also includes the official 12L APIs (API level 32), updated build tools, and system images for testing. These give you everything you need to test your apps with the 12L features.

With 12L, we’ve focused on refining the UI on large screen devices, across notifications, quick settings, lockscreen, overview, home screen, and more. For example, on screens above 600dp, the notification shade, lockscreen, and other system surfaces use a new two-column layout to take advantage of the screen area. 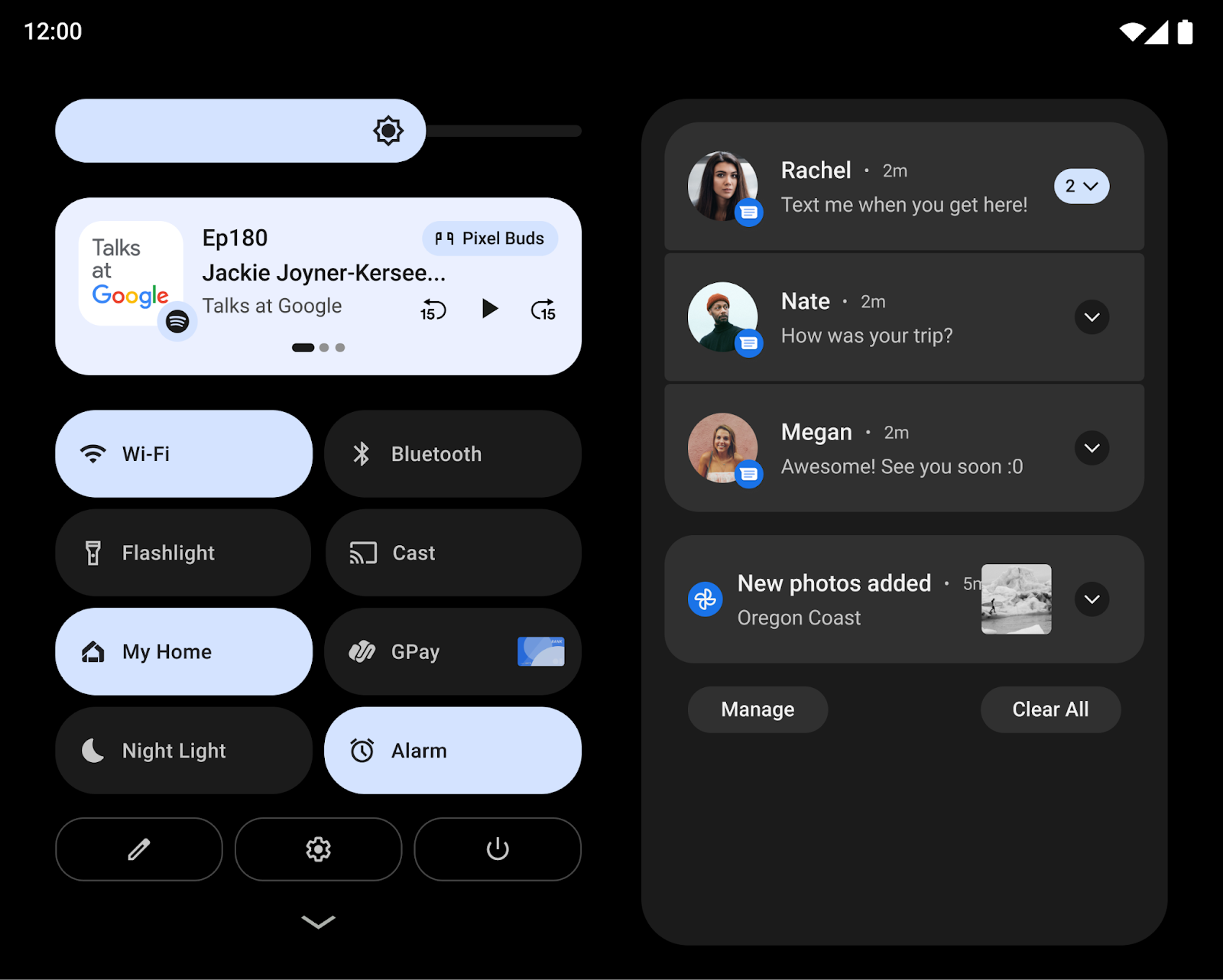 Two-column layouts show more and are easier to use


Multitasking is also more powerful and intuitive - 12L includes a new taskbar on large screens that lets users instantly switch to favorite apps on the fly or drag-and-drop apps into split-screen mode. Remember, on Android 12 and later, users can launch any app into split screen mode, regardless whether the app is resizable. Make sure to test your apps in split screen mode!

Last, we’ve improved compatibility mode with visual and stability improvements to offer a better letterboxing experience for users and help apps look better by default. If your app is not yet optimized for large screens, make sure to test your app with the new letterboxing.

More APIs and tools to help you build for large screens

As you optimize your apps for large screens, here are some of our latest APIs and tools that can make it easier to build a great experience for users.

Make sure to check out all of our large screens developer resources for details on these and other APIs and tools.

Get started with 12L on a device!

With the 12L feature drop coming to devices early next year, now is a great time to optimize your apps for large screens. For developers, we highly recommend checking out how your apps work in split screen mode with windows of various sizes. If you haven’t optimized your app yet, see how it looks in different orientations and try the new compatibility mode changes if they apply.

The easiest way to get started with the large screen features is using the Android Emulator in a foldable or tablet configuration - see the complete setup instructions here.

Now you can also flash 12L onto a large screen device. Through a partnership with Lenovo, you can try 12L preview builds on the Lenovo Tab P12 Pro. Currently Lenovo is offering a Developer Preview 1 build, with updates coming in the weeks ahead. Visit Lenovo's 12L preview site for complete information on available builds and support.

12L is coming to phones, too, and although you won’t see the large screen features on smaller screens, we welcome you to try out the latest improvements in this feature drop. Just enroll your supported Pixel device here to get the latest 12L Beta update over-the-air. If you are still enrolled in the Android 12 Beta program, you’ll automatically receive the update 12L.

For details on 12L and the release timeline, visit the 12L developer site. You can report issues and requests here, and as always, we appreciate your feedback!