Posted by Marc Stevens (CWI Amsterdam), Elie Bursztein (Google), Pierre Karpman (CWI Amsterdam), Ange Albertini (Google), Yarik Markov (Google), Alex Petit Bianco (Google), Clement Baisse (Google)
Cryptographic hash functions like SHA-1 are a cryptographer’s swiss army knife. You’ll find that hashes play a role in browser security, managing code repositories, or even just detecting duplicate files in storage. Hash functions compress large amounts of data into a small message digest. As a cryptographic requirement for wide-spread use, finding two messages that lead to the same digest should be computationally infeasible. Over time however, this requirement can fail due to attacks on the mathematical underpinnings of hash functions or to increases in computational power.

Today, 10 years after of SHA-1 was first introduced, we are announcing the first practical technique for generating a collision. This represents the culmination of two years of research that sprung from a collaboration between the CWI Institute in Amsterdam and Google. We’ve summarized how we went about generating a collision below. As a proof of the attack, we are releasing two PDFs that have identical SHA-1 hashes but different content.

For the tech community, our findings emphasize the necessity of sunsetting SHA-1 usage. Google has advocated the deprecation of SHA-1 for many years, particularly when it comes to signing TLS certificates. As early as 2014, the Chrome team announced that they would gradually phase out using SHA-1. We hope our practical attack on SHA-1 will cement that the protocol should no longer be considered secure.

We hope that our practical attack against SHA-1 will finally convince the industry that it is urgent to move to safer alternatives such as SHA-256.

What is a cryptographic hash collision? 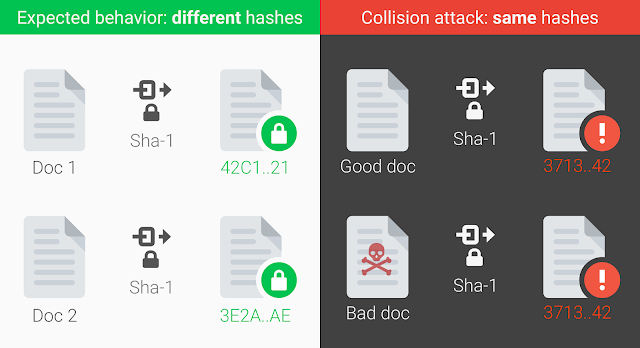 A collision occurs when two distinct pieces of data—a document, a binary, or a website’s certificate—hash to the same digest as shown above. In practice, collisions should never occur for secure hash functions. However if the hash algorithm has some flaws, as SHA-1 does, a well-funded attacker can craft a collision. The attacker could then use this collision to deceive systems that rely on hashes into accepting a malicious file in place of its benign counterpart. For example, two insurance contracts with drastically different terms.

In 2013, Marc Stevens published a paper that outlined a theoretical approach to create a SHA-1 collision. We started by creating a PDF prefix specifically crafted to allow us to generate two documents with arbitrary distinct visual contents, but that would hash to the same SHA-1 digest. In building this theoretical attack in practice we had to overcome some new challenges. We then leveraged Google’s technical expertise and cloud infrastructure to compute the collision which is one of the largest computations ever completed.

Here are some numbers that give a sense of how large scale this computation was:

While those numbers seem very large, the SHA-1 shattered attack is still more than 100,000 times faster than a brute force attack which remains impractical.
Mitigating the risk of SHA-1 collision attacks
Moving forward, it’s more urgent than ever for security practitioners to migrate to safer cryptographic hashes such as SHA-256 and SHA-3. Following Google’s vulnerability disclosure policy, we will wait 90 days before releasing code that allows anyone to create a pair of PDFs that hash to the same SHA-1 sum given two distinct images with some pre-conditions. In order to prevent this attack from active use, we’ve added protections for Gmail and GSuite users that detects our PDF collision technique. Furthermore, we are providing a free detection system to the public.
You can find more details about the SHA-1 attack and detailed research outlining our techniques here.
About the team
This result is the product of a long-term collaboration between the CWI institute and Google’s Research security, privacy and anti-abuse group.
Marc Stevens and Elie Bursztein started collaborating on making Marc’s cryptanalytic attacks against SHA-1 practical using Google infrastructure. Ange Albertini developed the PDF attack, Pierre Karpman worked on the cryptanalysis and the GPU implementation, Yarik Markov took care of the distributed GPU code, Alex Petit Bianco implemented the collision detector to protect Google users and Clement Baisse oversaw the reliability of the computations.