Over the past few years, our team has focused on improving the development experience for building Android apps with Android Studio. Since the launch of Android Studio, we have been impressed with the excitement and positive feedback. As the official Android IDE, Android Studio gives you access to a powerful and comprehensive suite of tools to evolve your app across Android platforms, whether it's on the phone, wrist, car or TV.

To that end and to focus all of our efforts on making Android Studio better and faster, we are ending development and official support for the Android Developer Tools (ADT) in Eclipse at the end of the year. This specifically includes the Eclipse ADT plugin and Android Ant build system.

If you have not had the chance to migrate your projects to Android Studio, now is the time. To get started, download Android Studio. For many developers, migration is as simple as importing your existing Eclipse ADT projects in Android Studio with File → New→ Import Project as shown below: 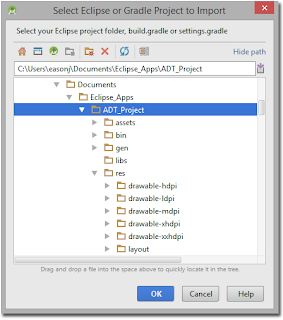 Over the next few months, we are migrating the rest of the standalone performance tools (e.g. DDMS, Trace Viewer) and building in additional support for the Android NDK into Android Studio.

We are focused on Android Studio so that our team can deliver a great experience on a unified development environment. Android tools inside Eclipse will continue to live on in the open source community via the Eclipse Foundation. Check out the latest Eclipse Andmore project if you are interested in contributing or learning more.