Google is constantly working to improve our systems that protect users from Potentially Harmful Applications (PHAs). Usually, PHA authors attempt to install their harmful apps on as many devices as possible. However, a few PHA authors spend substantial effort, time, and money to create and install their harmful app on one or a very small number of devices. This is known as a targeted attack.

In this blog post, we describe Chrysaor, a newly discovered family of spyware that was used in a targeted attack on a small number of Android devices, and how investigations like this help Google protect Android users from a variety of threats.

Chrysaor is spyware believed to be created by NSO Group Technologies, specializing in the creation and sale of software and infrastructure for targeted attacks. Chrysaor is believed to be related to the Pegasus spyware that was first identified on iOS and analyzed by Citizen Lab and Lookout.

Late last year, after receiving a list of suspicious package names from Lookout, we discovered that a few dozen Android devices may have installed an application related to Pegasus, which we named Chrysaor. Although the applications were never available in Google Play, we immediately identified the scope of the problem by using Verify Apps. We gathered information from affected devices, and concurrently, attempted to acquire Chrysaor apps to better understand its impact on users. We’ve contacted the potentially affected users, disabled the applications on affected devices, and implemented changes in Verify Apps to protect all users.

What is the scope of Chrysaor?

Chrysaor was never available in Google Play and had a very low volume of installs outside of Google Play. Among the over 1.4 billion devices protected by Verify Apps, we observed fewer than 3 dozen installs of Chrysaor on victim devices. These devices were located in the following countries: 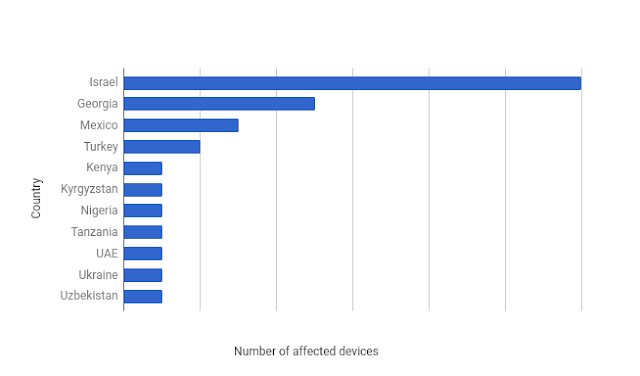 How we protect you

To protect Android devices and users, Google Play provides a complete set of security services that update outside of platform releases. Users don’t have to install any additional security services to keep their devices safe. In 2016, these services protected over 1.4 billion devices, making Google one of the largest providers of on-device security services in the world:

Additionally, we are providing detailed technical information to help the security industry in our collective work against PHAs.

What do I need to do?

It is extremely unlikely you or someone you know was affected by Chrysaor malware. Through our investigation, we identified less than 3 dozen devices affected by Chrysaor, we have disabled Chrysaor on those devices, and we have notified users of all known affected devices. Additionally, the improvements we made to our protections have been enabled for all users of our security services.

To ensure you are fully protected against PHAs and other threats, we recommend these 5 basic steps:

How does Chrysaor work?

To install Chrysaor, we believe an attacker coaxed specifically targeted individuals to download the malicious software onto their device. Once Chrysaor is installed, a remote operator is able to surveil the victim’s activities on the device and within the vicinity, leveraging microphone, camera, data collection, and logging and tracking application activities on communication apps such as phone and SMS.

One representative sample Chrysaor app that we analyzed was tailored to devices running Jellybean (4.3) or earlier. The following is a review of scope and impact of the Chrysaor app named com.network.android tailored for a Samsung device target, with SHA256 digest:

Upon installation, the app uses known framaroot exploits to escalate privileges and break Android’s application sandbox. If the targeted device is not vulnerable to these exploits, then the app attempts to use a superuser binary pre-positioned at /system/csk to elevate privileges.

After escalating privileges, the app immediately protects itself and starts to collect data, by:

Finally, the app can remove itself through three ways:

Additional digests with links to Chrysaor

As a result of our investigation we have identified these additional Chrysaor-related apps. 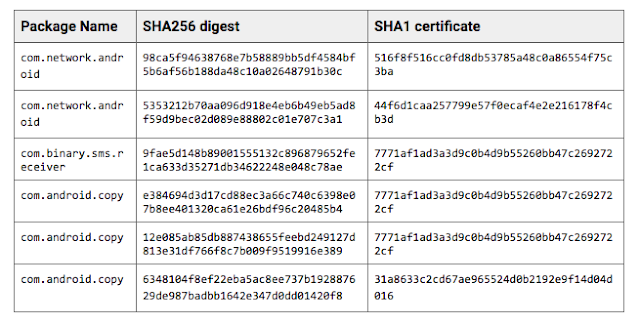 Lookout has completed their own independent analysis of the samples we acquired, their report can be viewed here.