With cord-cutting on the rise, brands have been looking for new ways to connect with an important part of their audience that are harder than ever to reach. According to fresh Nielsen data, more than half of 18- to 49-year-olds in the U.S. are either light viewers of TV or do not subscribe to TV; but over 90 percent of these people watch YouTube.1 Today we’re introducing a new set of opportunities on YouTube to help brands reach these viewers across content and devices.

At YouTube we’ve brought people back to the big screen by building a rich YouTube experience for set-top boxes, gaming consoles, streaming devices and smart TVs of all stripes. And now TV screens are our fastest growing screen counting over 150 million hours of watch time per day.2

We heard from advertisers that they want in so we have been working to make it easy for you to find your most engaged, valuable audience while they are watching YouTube on a TV set, with the new TV screens device type. In the coming months, we’ll add TV screens – joining computers, mobile phones and tablets – to AdWords and DoubleClick Bid Manager, so advertisers globally can tailor their campaigns for this environment – for example, by using a different creative.

We’ve already seen that people react positively to ads on the TV screen – based on Ipsos Lab Experiments, YouTube ads shown on TV drove a significant lift in ad recall and purchase intent, with an average lift of 47 percent and 35 percent respectively.3

YouTube audiences on every screen
And for brands who want help reaching cord cutters, we now offer a new segment in AdWords called “light TV viewers.” Advertisers will be able to reach people who consume most of their television and video content online and might be harder to reach via traditional media. This audience is reachable on YouTube across computers, mobile, tablets, and TV screens.

Content from some cable networks in the U.S. will be part of Google Preferred lineups so that brands can continue to engage their audience across all platforms. This means advertisers will be able to get both the most popular YouTube content and traditional TV content in a single campaign – plus, we’ll dynamically insert these ads, giving advertisers the ability to show relevant ads to the right audiences, rather than just showing everyone the same ad as they might on traditional TV.

As marketers continue to break the silos and think of holistic media plans, we’re excited to enable the opportunity. Because while TV screen viewing is big and growing fast, video is everywhere and the key is connecting with viewers wherever they watch.

2YouTube Internal Data. Global, accurate as of Jan 2018. Based on seven day average of watch time for TV screen devices, which include smart TVs, Roku/Apple TV and game consoles.

Last year we launched YouTube TV, the best way to enjoy cable-free live TV, and we’ve been working hard to make it better every day. Today we are excited to wish all our members an extra Happy Valentine's Day by bringing more of the networks you love to YouTube TV, including TNT, Adult Swim, TBS, CNN, Cartoon Network, truTV, Turner Classic Movies and more!

That’s great news for everyone, from Anderson Cooper addicts to Rick and Morty binge-watchers, and everything in between. Now you can also get breaking news from CNN, watch cable’s #1 new drama series The Alienist on TNT, catch up on TBS’s hit comedy series The Detour, check out the popular kids series Teen Titans Go!, and enjoy the new season of truTV’s Impractical Jokers - all included now with your YouTube TV membership.

For sports lovers in particular, we’ve got you covered: you now have access to March Madness and you can watch nationally televised NBA games, NBA All-Star weekend, NBA Playoff games, MLB Postseason games, the PGA Championship and soccer from the UEFA Champions League.

It would break our hearts for you to miss out on the action, so in the coming weeks, YouTube TV is also expanding to all top 100 U.S. markets! While we started out in just five markets and expanded to over 80 from there, we’re thrilled to announce that we are taking YouTube TV to over 85 percent of U.S. households, with the most live local broadcast stations in markets where YouTube TV is available. New markets include: Lexington, Dayton, Honolulu, Richmond, Mobile, and Syracuse. Check out here if YouTube TV is available in your city.

We will be increasing our price to $40/month on March 13 for new members. However, if you are already a member or sign up before March 13, we are keeping your original price of $35/month.

YouTube TV offers cable-free live TV through a simple and easy experience that’s built from the ground up for the 21st century. It includes:
So hop on the couch with us, fire up the TV remote and let’s celebrate the best way to watch cable-free live TV together. Happy Valentine’s Day, YouTube TV members! We’re having so much fun in our new relationship and are committed to making YouTube TV the live TV experience you’ve been waiting for. And if you are not a member, remember to join by March 13 to experience the new live TV service everyone’s talking about for only $35/month.

What can we say, YouTube TV is a cheap date :) Enjoy the game!

Posted by Heather Moosnick, Director of Content Partnerships, YouTube TV, who will be rooting for Team Curry #30 this Sunday in the NBA All-Star Game on TNT live on YouTube TV.

Since the launch of YouTube TV in April, you’ve streamed live sports, local and national news, and can't-miss shows on your phone, tablet and computer. Now, we're psyched to announce our new YouTube TV app, made for the big screen.

We know you love watching TV content on, well, your TV. In fact, over half the time spent watching YouTube TV is consumed through Chromecast on the big screen. And members who stream with a Chromecast are highly engaged, watching over four hours a day on the weekends with football season back in full swing.

In the coming weeks we'll be launching the new app on Smart TVs, such as LG, Samsung, Sony, along with Apple TV. We also recently expanded our TV device support by launching voice commands with Google Home paired with Chromecast.

If you love the simplicity of finding your favorite content on the mobile app, you'll be happy to know you'll still find our signature tabs on the TV app as well--home, live and library. Finding, playing, and recording your favorite live TV is as simple as before.

If you aren’t a YouTube TV member, try it out free today and start watching on the big screen right away. With game 6 of the World Series® tomorrow and a possibly historic game 7 on Wednesday, now's the time to start your free trial.

YouTube TV is now available in all top 50 metro areas, covering over two-thirds of the U.S. We're expanding quickly, so visit tv.youtube.com and sign up to be notified when we launch in your market.

We love TV. We love the shows, live sports, and can’t-miss events that drive our FOMO and need for #spoileralerts. But while what we watch on TV seems to get better every year, the way we watch TV never seems to change. How long do we have to wait until we can watch live TV on the go, on all our devices? When will we have DVRs big enough to handle all the things we want to record? And when will we be able to get the channels we care about, at a price we can afford, without all the commitments, equipment fees, and hassle?

Finally, live TV made for us. YouTube TV is here.


Today, we’re launching YouTube TV in the nation’s largest metro areas—New York, Los Angeles, San Francisco Bay Area, Chicago, and Philadelphia—with more U.S. markets coming soon. A YouTube TV membership is only $35 a month, less than half the average cost of cable. And there are no commitments; you can cancel anytime.

We can’t wait for you to experience YouTube TV for yourself, so we’re giving you a free one month trial. We’ll also give you a complimentary Google Chromecast after your first month’s payment, while supplies last.

With a YouTube TV membership, you’ll get:
To get started, check out tv.youtube.com today to start your free trial. You can also sign up on the Google Play Store and Apple App Store. If you’re not in one of the initial launch markets but want to find out when YouTube TV is coming to your area, you can sign up here. There’s no question that people love TV, from live sports to breaking news to sitcoms and dramas. But the truth is, there are a lot of limitations in how to watch TV today. Unlike online video, people can't watch TV when they want, on any screen and on their terms, without commitments. Consumers have made it clear that they want live TV without all the hassle. They don’t want to worry about their DVR filling up. They don't want to miss a great game or their favorite show because they’re on the go. They tell us they want TV to be more like YouTube.

Well, we’ve got some good news! We’re bringing the best of the YouTube experience to live TV. To do this, we’ve worked closely with our network and affiliate partners to evolve TV for the way we watch today.

Meet YouTube TV. It’s live TV designed for the YouTube generation—those who want to watch what they want, when they want, how they want, without commitments.

Here’s what YouTube TV offers:
YouTube TV will be available soon in the largest U.S. markets and will quickly expand to cover more cities across the country. Visit tv.youtube.com and sign up to find out when we’ll launch in your market.

With so much great content available on TV, we’re thrilled to build an experience that lets you enjoy it as easily as you watch YouTube. We can't wait for you to tune in. 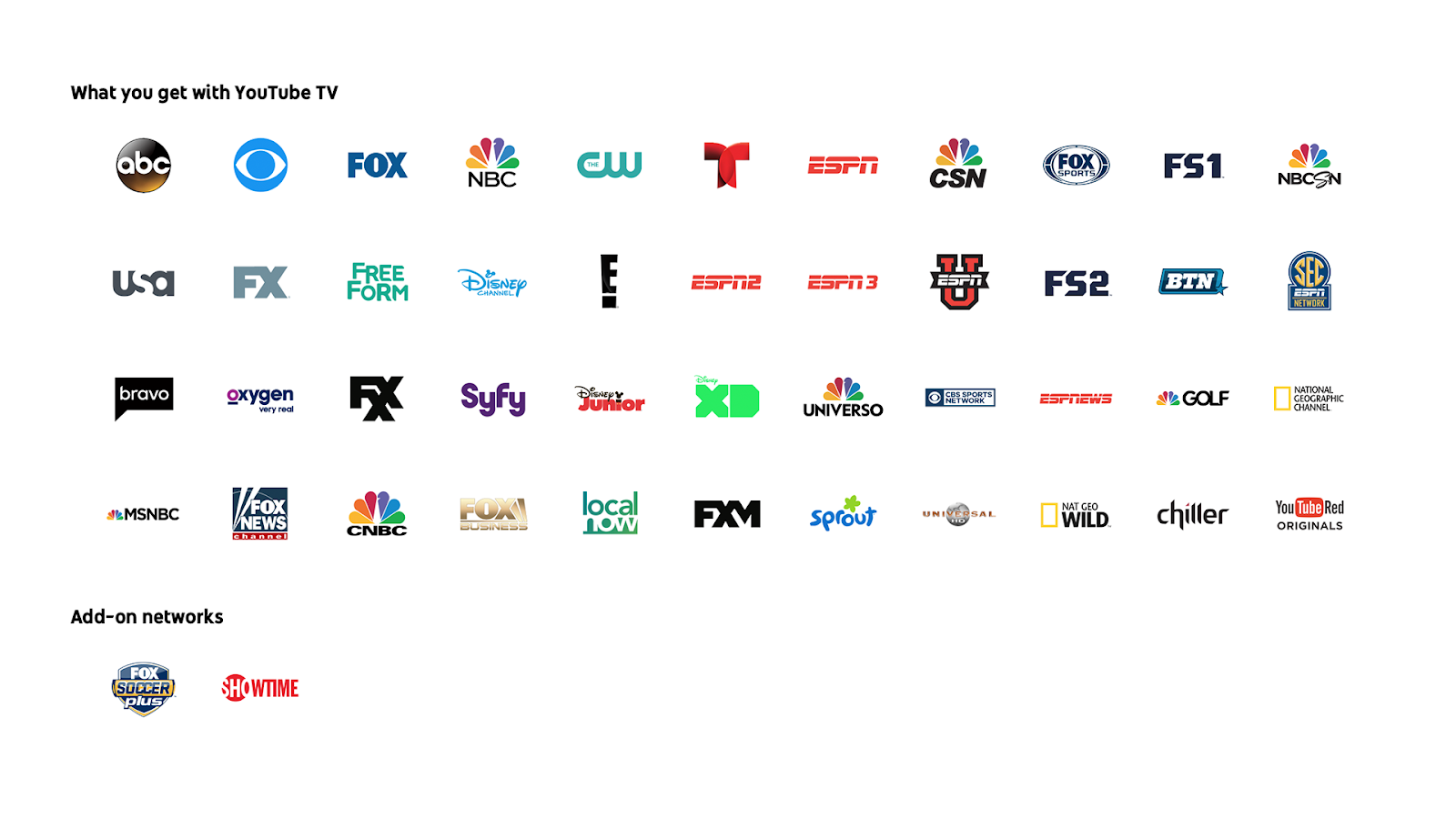