I just stepped off the stage at VidCon, a conference created from scratch by Hank and John Green in 2010 that brings together fans, creators, and industry leaders to celebrate the power of online video. I talked about how over the last 13 years, YouTube has grown from an ambitious idea into a worldwide movement built on free expression and the power of openness.

With more than 1.9 billion logged-in users who come to YouTube every month and localized versions stretching across 90 countries and 80 languages, we’re opening up the world to anyone with a cell phone and an internet connection.

YouTube is a vibrant community where everyone has a voice. Every day, creators use their voice to entertain, spur action and bring about positive change. That’s why over the last year we’ve doubled down on building the products and tools that the creator community needs. Not only to thrive on YouTube, but to continue to develop the video platform of the future.

The next big steps for creator monetization

YouTube lets creators connect with their community and gives them the opportunity to earn money while doing what they love. Thanks to advertisers, creators around the world have been able to build businesses, creating an entirely new global economy that’s seen incredible growth. The number of creators earning five figures a year is up by 35 percent and the number of creators earning six figures is up by 40 percent. As in previous years, the vast majority of the revenue is coming from our advertising partners. We’ll continue investing here, but we also want to think beyond ads. Creators should have as many ways and opportunities to make money as possible.

We’ve been working on new tools that not only help creators better engage with their fans, they also enable them to make money while doing it. This is an idea that really began last year with Super Chat, a product that allows fans to purchase messages that stand out within a live chat. We’ve seen tremendous success with Super Chat and have since expanded to Ticketing, Merchandise, Channel Memberships and more. We’re also bringing creators and brands together to form unique marketing partnerships via FameBit.

With Channel Memberships, viewers pay a monthly recurring fee of $4.99 to get unique badges, new emoji, Members-only posts in the Community tab, and access to unique custom perks offered by creators, such as exclusive livestreams, extra videos, or shout-outs. Channel Memberships have already been available for a select group of creators on YouTube as Sponsorships. We’ve seen a lot of creators find success with this new business model. So, we’ll soon be expanding this to eligible channels with more than 100,000 subscribers on YouTube under the new name Channel Memberships. We hope to bring it to even more creators in the coming months.

Creators who have already been experimenting with this feature on YouTube have seen encouraging results. Since launching in January, comedy creator Mike Falzone more than tripled his YouTube revenue. And traveling duo Simon and Martina have built a closer-knit community and revamped a miniseries exclusively for their members, in more than 30 countries from Finland to the Philippines. 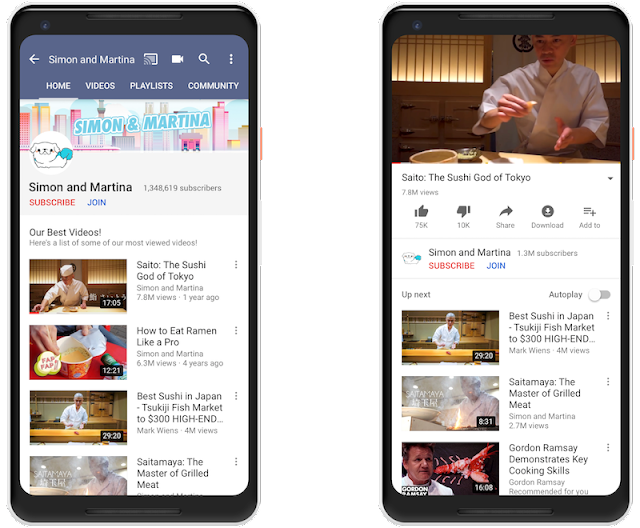 Merchandise has been a part of many creators’ businesses for a long time. We want to make it easier for more creators to sell merch directly from their channel. So we’ve built a product that allows them to do just that. From shirts with a logo to phone cases with a creator’s face, we’ve joined forces with Teespring so creators can choose from over 20 merchandise items to customize and sell via a shelf on their channel. This will be available to all eligible U.S.-based channels with over 10,000 subscribers starting today, and we plan to bring even more merchandising partners and creators in soon.

Just take a look at Joshua Slice’s merchandise shelf. The creator of Lucas the Spider recently turned his hero character into a plushie selling over 60,000 furry friends and generating over $1 million in profit in just 18 days, according to Teespring.

The engagement between fans and creators is at the heart of YouTube. We’re working on new ways to help creators strengthen those unique bonds. Livestreams have brought the YouTube community together during the biggest music, science, and gaming events. We’ve also built a Community Tab that allows creators to move beyond just video to build even deeper connections with fans through GIFs, pics, polls, and text. And we’ve started experimenting with our take on Stories, but designed specifically for YouTube creators—coming to all eligible creators with more than 10,000 subscribers later this year.

Today, we’re introducing a new way for creators to upload content to YouTube called Premieres. With Premieres, creators will be able to debut pre-recorded videos as a live moment. When creators choose to release a Premiere, we’ll automatically create a public landing page to build anticipation and hype up new content. When all fans show up to watch the premiere, they’ll be able to chat with each other (and with the creator!) in real time via live chat. It’s as if a creator’s entire community is in one theater together watching their latest upload.

Premieres also unlocks new revenue streams. For the first time, creators can use Super Chat on traditional YouTube uploads and take advantage of Channel Memberships perks that were previously only available on Live videos.

Premieres are starting to roll out to creators today and will be available broadly soon. If you want to experience one for yourself, check out some upcoming premieres from creators such as Leroy Sanchez and Ari Fitz, with more Premieres coming from JacksFilms, Corridor Digital, Inanna Sarkis, and Jackson Bird soon.

YouTube creators are the heartbeat of our platform. That’s why we’re committed to building products that empower and support the creator community. We hope these tools help creators build a stronger community and earn more money while doing it, because when they succeed, the entire YouTube community thrives.

I just got off stage after a great conversation with Rhett and Link at VidCon, where we announced a number of exciting new updates. We spoke about VR, YouTube TV, new original series and a number of improvements to the core YouTube experience. Let’s talk about that!

I always have an incredible time at VidCon and this year is no different. I met amazing fans and inspirational creators and I experienced, first-hand, the wonderful sense of community and belonging between them. I hope some of these features and announcements will make their YouTube experience—and yours—better than ever.