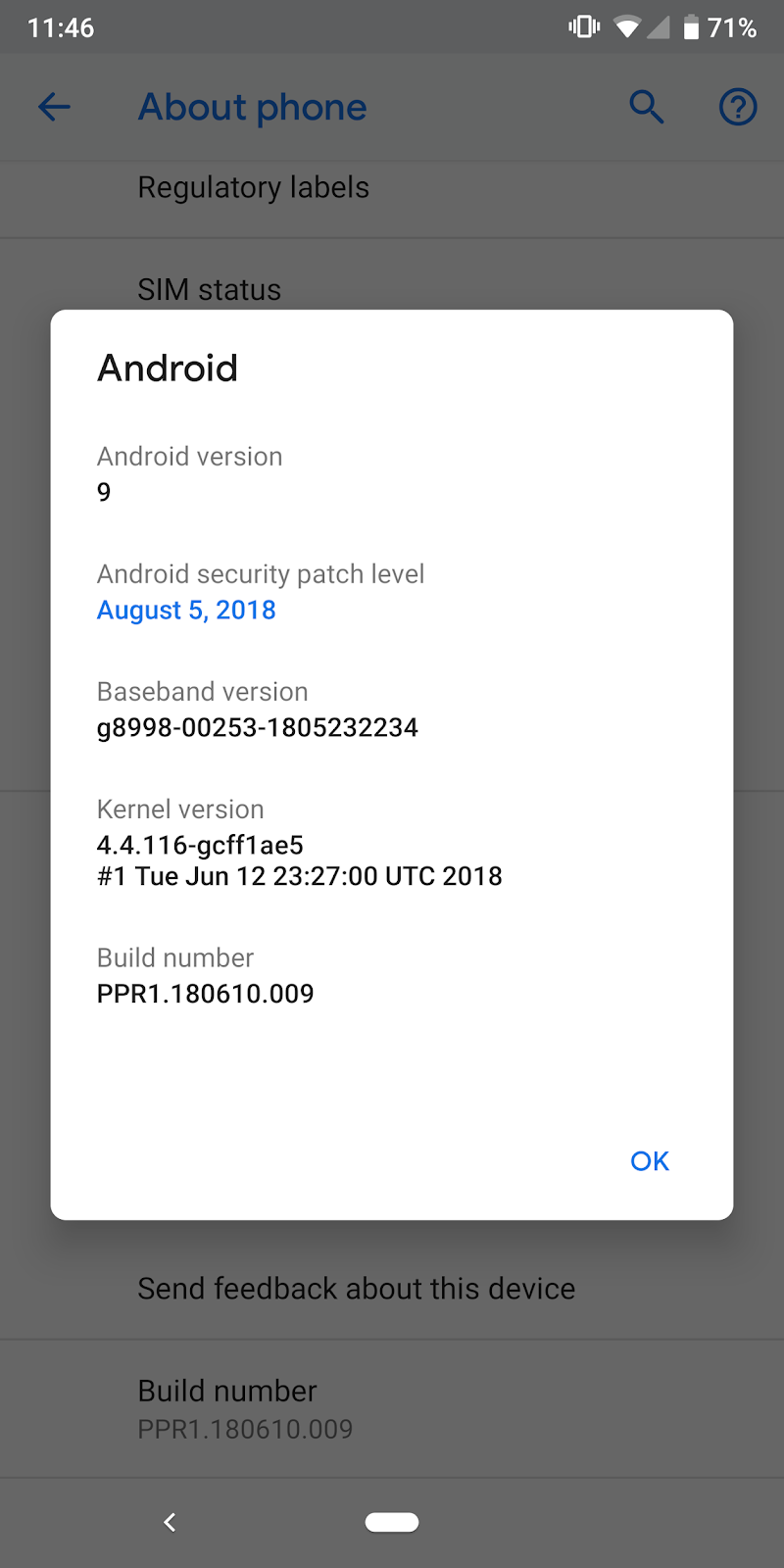 As we noted in our 2017 Android Security Year-in-Review, Android's anti-exploitation strength now leads the mobile industry and has made it exceedingly difficult and expensive to leverage operating system bugs into compromises. Nevertheless, an important defense-in-depth strategy is to ensure critical security updates are delivered in a timely manner. Monthly security updates are the recommended best practice for Android smartphones. We deliver monthly Android source code patches to smartphone manufacturers so they may incorporate those patches into firmware updates. We also deliver firmware updates over-the-air to Pixel devices on a reliable monthly cadence and offer the free use of Google's firmware over-the-air (FOTA) servers to manufacturers. Monthly security updates are also required for devices covered under the Android One program.

While monthly security updates are best, at minimum, Android manufacturers should deliver regular security updates in advance of coordinated disclosure of high severity vulnerabilities, published in our Android bulletins. Since the common vulnerability disclosure window is 90 days, updates on a 90-day frequency represents a minimum security hygiene requirement.

We've also been working to make Android easier to update, overall. A key pillar of that strategy is to improve modularity and clarity of interfaces, enabling operating system subsystems to be updated without adversely impacting others. Project Treble is one example of this strategy in action and has enabled devices to update to Android P more easily and efficiently than was possible in previous releases. The modularity strategy applies equally well for security updates, as a framework security update can be performed independently of device specific components.

Partner programs are a third key pillar of the updateability strategy. One example is the GMS Express program, in which Google is working closely with system-on-chip (SoC) suppliers to provide monthly pre-integrated and pre-tested Android security updates for SoC reference designs, reducing cost and time to market for delivering them to users.

Recently, researchers reported a handful of missing security bug fixes across some Android devices. Initial reports had several inaccuracies, which have since been corrected. We have been developing security update testing systems that are now making compliance failures less likely to occur. In particular, we recently delivered a new testing infrastructure that enables manufacturers to develop and deploy automated tests across lower levels of the firmware stack that were previously relegated to manual testing. In addition, the Android build approval process now includes scanning of device images for specific patterns, reducing the risk of omission.

In 2017, about a billion Android devices received security updates, representing approximately 30% growth over the preceding year. We continue to work hard devising thoughtful strategies to make Android easier to update by introducing improved processes and programs for the ecosystem. In addition, we are also working to drive increased and more expedient partner adoption of our security update and compliance requirements. As a result, over coming quarters, we expect the largest ever growth in the number of Android devices receiving regular security updates.

Bugs are inevitable in all complex software systems, but exploitability of those bugs is not. We're working hard to ensure that the incidence of potentially harmful exploitation of bugs continues to decline, such that the frequency for security updates will reduce, not increase, over time. While monthly security updates represents today's best practice, we see a future in which security updates becomes easier and rarer, while maintaining the same goal to protect all users across all devices.