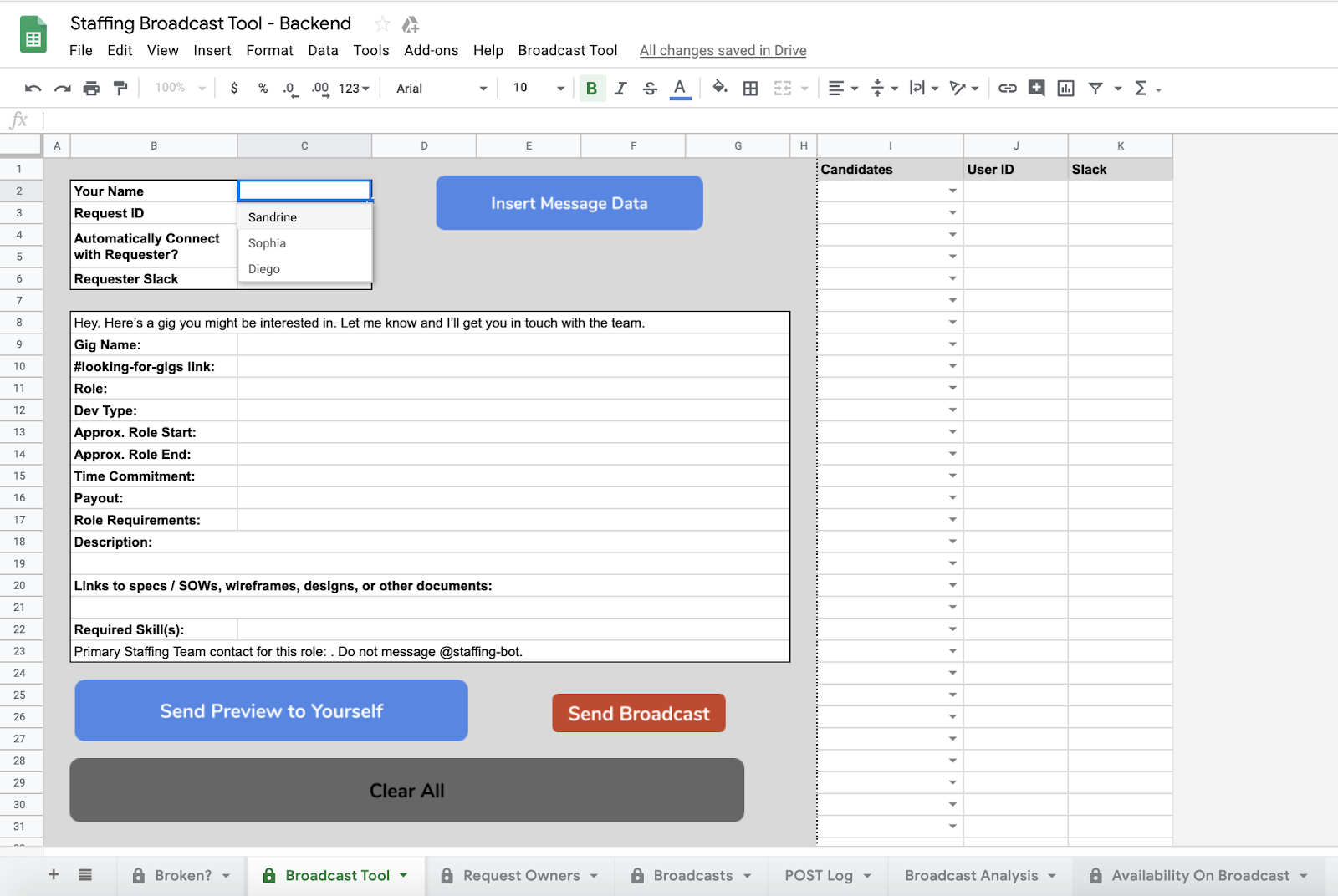 Google Cloud provides multiple services for gathering and managing data. Google Forms paired with Google Sheets are quite popular as they require no engineering resources while being incredibly powerful, providing storage of up to 5 million rows of data and built-in analytics for small team projects.

At the other end of the spectrum, to support a high volume of users or data, Google Cloud provides advanced serverless platforms like Google App Engine (web app-hosting) and Google Cloud Functions (function/service-hosting) that can use Google Cloud Firestore for fast and scalable data storage. These are perfect for professional engineering teams that need autoscaling to respond to any level of user traffic and data input. Such apps can also be packaged into a container and deployed serverlessly on Google Cloud Run.

However, it's quite possible your needs are right in-between. Today, we're happy to present the Gigster story and their innovative use of Google Apps Script—a highly-accessible service conventionally relegated to simple macro and add-on development, but which Gigster used to its advantage, building robust systems to transform their internal operations. Apps Script is also serverless, meaning Gigster didn't have to manage any servers for their application nor did they need to find a place to host its source code.

Gigster enables distributed teams of software engineers, product managers and designers to build software applications for enterprise clients. Over the past five years, Gigster has delivered thousands of projects, all with distributed software teams. Our group, the Gigster Staffing Operations Team, is responsible for assembling these teams from Gigster’s network of over 1,000 freelancers.

The Apps Script ecosystem has emerged as the most critical component in our toolkit for building this internal software, due to its versatility and ease of deployment. We want to share how one piece of the staffing process has evolved to become more powerful over time thanks to Apps Script. Ultimately, we hope that sharing this journey enables all types of teams to build their own tools and unlock new possibilities.

To add complexity, many of these steps require working with different third-party applications. For awhile, we performed every step manually, tracking every piece of data generated in one central Sheet (the “Staffing Broadcast Google Sheet”). At a certain point, this back-and-forth work to log data from numerous applications became unsustainable. Although we leveraged Google Sheets features like Data Validation rules and filters, the Staffing Broadcast Sheet could not alleviate the high degree of manual processes that were required of the team. 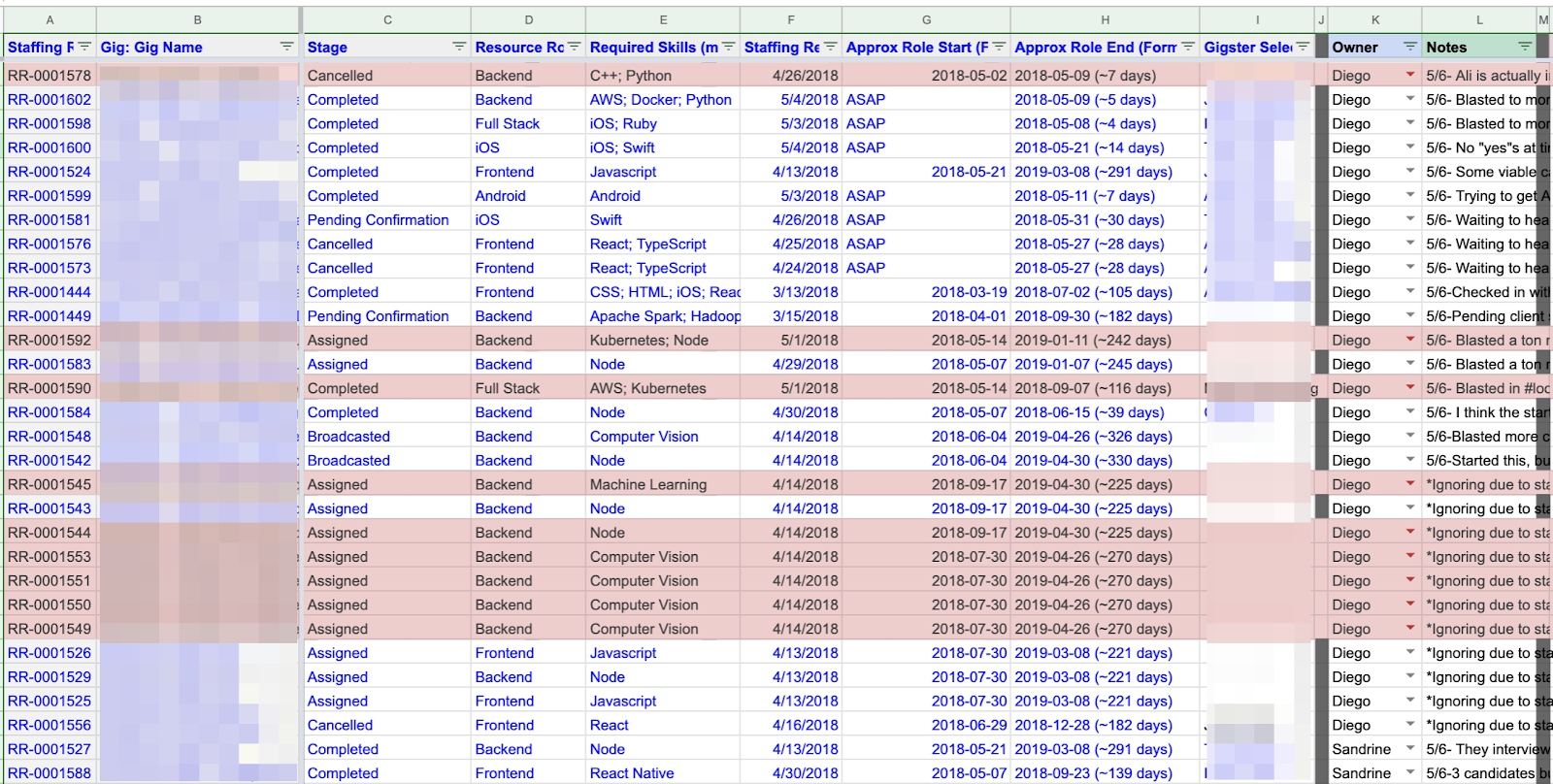 The key transformation was integrating Sheets data with third-party APIs via Apps Script. This enabled us to cut out the most time-consuming operations. We no longer had to flip between applications to message candidates, wait for their replies, and then manually track responses.

To interact with these APIs, we built a user interface directly into the Staffing Broadcast Google Sheet. By introducing an information module, as well as drop-down lists and buttons, we were able to define a small set of manual actions versus the much wider list of tasks the tool would perform automatically across multiple applications.

By integrating Google Apps Script with third-party APIs and creating a user interface, we evolved the Staffing Broadcast Tool to centralize and automate almost every step of the staffing process.

doPost() is the key function in our staffing tool that facilitates third-party services triggering our Apps Script automations. Below is a snippet of how we listened to candidates' responses from a third-party messaging application. In this case, queueing the third-party message in a Google Sheet so it can be processed with improved error-handling.

Almost all manual work associated with finding candidates was automated through the combination of integrations with third-party APIs and having a user interface to perform a small, defined set of actions. Our team’s day-to-day became shockingly simple: select candidates to receive messages within the Staffing Broadcast Tool, then click the “Send Broadcast” button. That’s it. The tool handled everything else.

Leveraging Sheets as our foundation, we fundamentally transformed our spreadsheet into a custom software application. The spreadsheet went from a partially automated datastore to a tool that provided an end-to-end automated solution, requiring only the click of a few buttons to execute.

Evolution into a standalone application

While satisfied, we understood that having our application live in Google Sheets had its limitations, namely, it was difficult for multiple team members to simultaneously use the tool. Using doGet(), the sibling to doPost(), we began building an HTML frontend to the Staffing Broadcast Tool. In addition to resolving difficulties related to multiple users being in a spreadsheet, it also allowed us to build an easier-to-use and more responsive tool by leveraging Bootstrap & jQuery.

Having multiple users in a single Google Sheet can create conflicts, but Apps Script allowed us to build a responsive web app leveraging common libraries like Bootstrap & jQuery that eliminated those problems while providing an improved user experience.

When other teams at Gigster got wind of what we built, it was easy to grant access to others beyond the Staffing Operations Team. Since Apps Script is part of the G Suite developer ecosystem, we relied on Google’s security policies to help deploy our tools to larger audiences.

While this can be done through Google’s conventional sharing tools, it can also be done with built-in Apps Script functions like Session.getActiveUser() that allow us to restrict access to specific Google users. In our case, those within our organization plus a few select users.

To this day, we continue to use this third version of the Staffing Broadcast Tool in our daily operations as it supports 100% of all client projects at Gigster.

By fundamentally transforming the Staffing Broadcast Tool with Apps Script, Gigster’s Staffing Operations Team increased its efficiency while supporting the growth of our company. Inspired by these business benefits, we applied this application-building approach using Apps Script for multiple tools, including candidate searching, new user onboarding, and countless automations.

Our team’s psychological shift about how we view what we are capable of, especially as a non-engineering team, has been the most valuable part of this journey. By leveraging an already familiar ecosystem to build our own software, we have freed team members to become more self-sufficient and valuable to our customers.

To get started on your Apps Script journey, we recommend you check out the Apps Script Fundamentals playlist and the official documentation. And if you're a freelancer looking to build software applications for clients, we’re always looking for talented software engineers, product managers or designers to join Gigster’s Talent Network.

Posted by Rudy Galfi, Product Manager for AMP at Google

The AMP story format is a recently launched addition to the AMP Project that provides content publishers with a mobile-focused format for delivering news and information as visually rich, tap-through stories.

A visual-driven format for evolving news consumption on mobile

Some stories are best told with text while others are best expressed through images and videos. On mobile devices, users browse lots of articles, but engage with few in-depth. Images, videos and graphics help publishers to get their readers' attention as quickly as possible and keep them engaged through immersive and easily consumable visual information.

Recently, as with many new or experimental features within AMP, contributors from multiple companies — in this case, Google and a group of publishers — came together to work toward building a story-focused format in AMP. The collective desire was that this format offer new, creative and visually rich ways of storytelling specifically designed for mobile.

Minimize technical challenges and let creators focus on the storytelling

The mobile web is great for distributing and sharing content, but mastering performance can be tricky. Creating visual stories on the web with the fast and smooth performance that users have grown accustomed to in native apps can be challenging. Getting these key details right often poses prohibitively high startup costs, particularly for small publishers.

AMP stories are built on the technical infrastructure of AMP to provide a fast, beautiful experience on the mobile web. Just like any web page, a publisher hosts an AMP story HTML page on their site and can link to it from any other part of their site to drive discovery. And, as with all content in the AMP ecosystem, discovery platforms can employ techniques like pre-renderable pages, optimized video loading and caching to optimize delivery to the end user.

AMP stories aim to make the production of stories as easy as possible from a technical perspective. The format comes with preset but flexible layout templates, standardized UI controls, and components for sharing and adding follow-on content.

Yet, the design gives great editorial freedom to content creators to tell stories true to their brand. Publishers involved in the early development of the AMP stories format — CNN, Conde Nast, Hearst, Mashable, Meredith, Mic, Vox Media, and The Washington Post — have brought together their reporters, illustrators, designers, producers, and video editors to creatively use this format and experiment with novel ways to tell immersive stories for a diverse set of content categories. 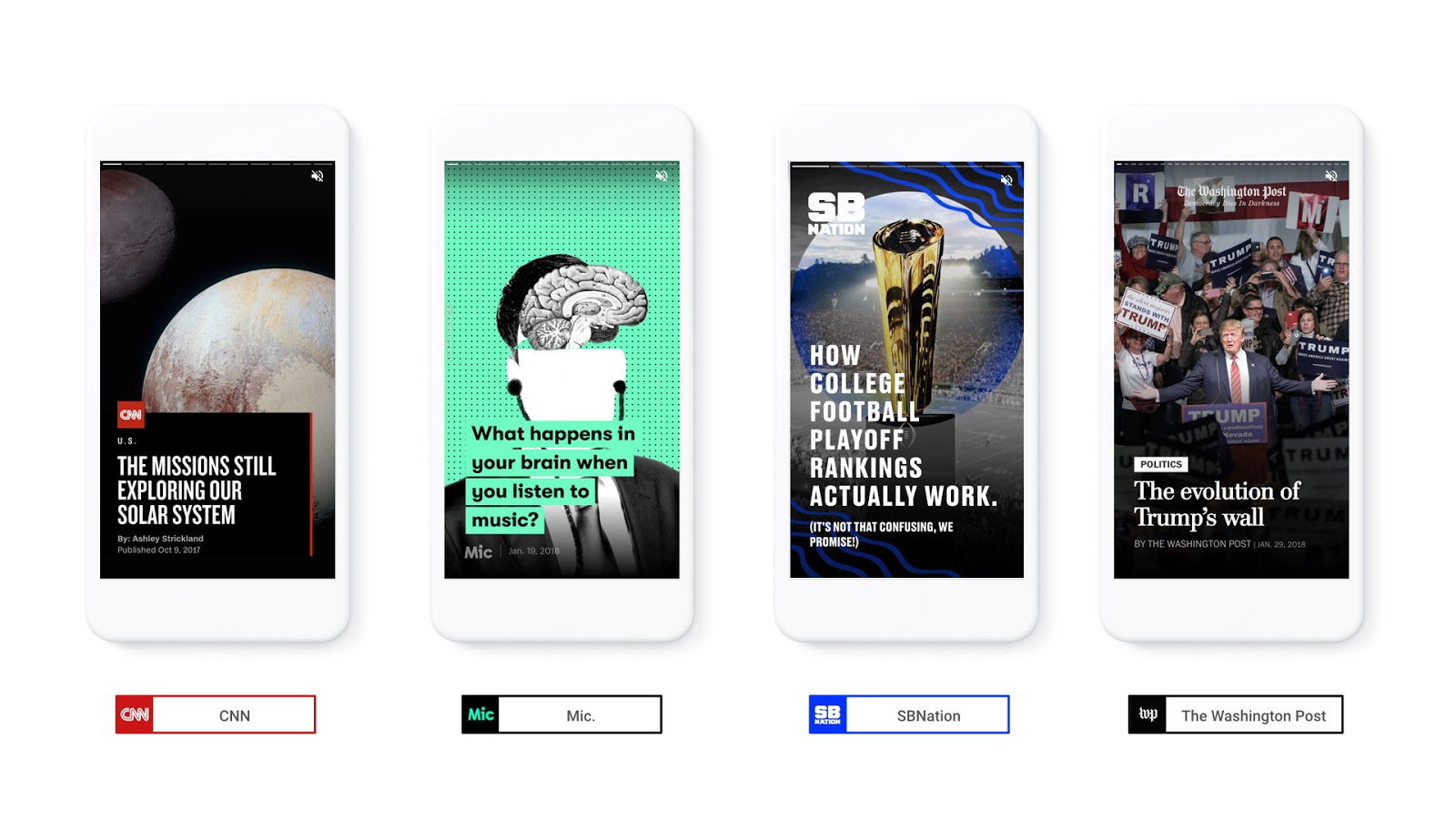 Today AMP stories are available for everyone to try on their websites. As part of the AMP Project, the AMP story format is free and open for anyone to use. To get started, check out the tutorial and documentation. We are looking forward to feedback from content creators and technical contributors alike.

Also, starting today, you can see AMP stories on Google Search. To try it out, search for publisher names (like the ones mentioned above) within g.co/ampstories using your mobile browser. At a later point, Google plans to bring AMP stories to more products across Google, and expand the ways they appear in Google Search.

The Material Design Guidelines are a living documentation of visual, interactive, and motion design guidance across platforms and devices.

Beyond guidance, Material Design is a also system that supports and strengthens communication and productivity with new tools and inspiration. With today's update, Material is introducing a new way to learn about color. The new color tool helps you create, share, and apply color palettes to a sample UI and through components in codepen. The tool also supports accessibility by evaluating the legibility of text for any color combination. Specific features include: 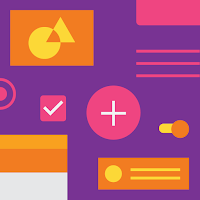 Create color schemes that include darker and lighter variations of your primary and secondary colors. 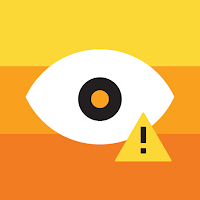 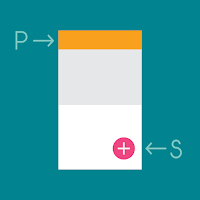 Preview your UI in color

Preview the look of your color scheme across a range of Material Design Components, with editable HTML, CSS, or JavaScript in Codepen.

With these new tools to dabble with color schemes, you'll be able to give you users a richer experience, so we can't wait to see what you come up with. To get the latest news and engage with us directly, please follow us on our new Twitter account (@materialdesign) and visit https://material.io/.