It’s unlikely that programmatic TV will start out in the same manner as it did in the digital display ad world. That means no real-time bidding on open exchanges right off the bat. TV inventory is scarce and premium, so programmers and distributors are going to want a high level of control over transactions. As a result, we’re likely to see a mix of programmatic reservations, preferred deals, and private exchange deals. These will be coupled with premium TV and video marketplaces (such as Google Partner Select), which will emerge to help TV ad buyers and sellers transact.
Chief among programmers’ and broadcasters’ concerns about programmatic TV is that it will lower the value of their TV inventory. Let’s quash that thinking right now. Here’s why programmatic makes sense for TV programmers and broadcasters:
Download the new whitepaper for the in-depth story on each of the six reasons. 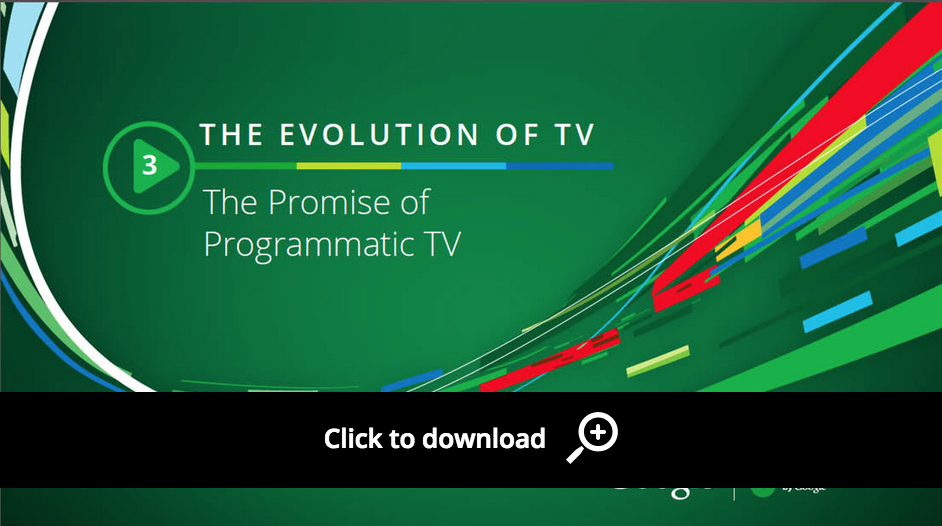 In our Evolution of TV series we've been exploring the 7 dynamics driving TV’s on-going transition to delivery over the internet. In the series we uncover that viewers increasingly want to watch their favorite TV shows anytime, anywhere, and on any screen. Delivering against this cross-screen mix of traditional linear TV and TV over the internet, while making advertising as addressable and measurable as possible, requires both new business models and sophisticated new technology.
Join Google’s Director of Product Management for Video Advertising, Rany Ng, at NAB Show for some exciting new TV announcements. Rany will take the stage for a keynote speech where she’ll discuss how this new, accelerated viewing model is changing the way that programmers, distributors and publishers deliver and monetize their content across every TV screen.
Following the keynote, Don Norton our Director of Broadcast and Sports Partnerships, will moderate a panel and Q&A session with senior industry thought-leaders from MTV Networks (Viacom), Pelmorex and our own mDialog.