Episode twelve of The Mobile Ads Garage is live on YouTube! If you haven't seen it before, The Mobile Ads Garage is a video tutorial series that covers how to use the Mobile Ads SDK to display ads from AdMob and DoubleClick for Publishers. Each episode covers one aspect of the SDK, breaks down the feature, and shows screencasts of real implementations on both Android and iOS – all in a friendly format.

With their customizable presentations and ability to be precached, Native Express ads fit right in with list-based user interfaces: 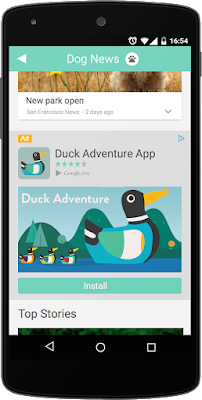 In this deep dive episode of the Mobile Ads Garage, you'll learn how to integrate Native Express ads into an iOS app that uses a UITableViewController for its primary UI. Along the way you'll get a detailed set of step and see screencasts of an implementation in Xcode. The episode also covers a handy technique for tapping into the ad lifecycle to load native express ads sequentially, from the top of the list to the bottom.

If you like the video, save the Mobile Ads Garage playlist to your YouTube Playlist collection and you'll never miss an episode.

We'd love to hear which AdMob features you'd like to learn more about. The comment sections for the videos are open, and you're welcome to toss out ideas for new episodes and examples you'd like to see. If you have a technical question relating to something discussed in one of the episodes, you can bring it to our support forum.

We're pleased to announce we've completed the rollout of the new AdMob to over 200 countries. AdMob is now a complete platform for developers to monetize, promote and analyze their apps, with Google Analytics directly available in the AdMob interface. We hope you enjoy the new features it provides, including ad network optimization and simplified mediation. You can read more about the new features and changes in this help center doc.

Since the new AdMob is now available to everyone, we’re beginning our deprecation of the legacy AdMob, and will be sunsetting the old platform on August 31st, 2014. After August 31st:

Please upgrade to the new AdMob as soon as possible - and definitely before the end of August. If you encounter difficulties, please see the help docs and support forms in our Help Center.

We also want to remind you that after August 1st, 2014, the Google Play Store will no longer accept apps using the legacy AdMob SDK. If you're an Android publisher, you should migrate to Google Play Services as soon as possible. We have plenty of resources for you including our migration guide and intro video - and if you still need help, please ask your technical questions on our forum.

We hope that you're as excited about the evolution of AdMob as we are!

According to Gartner, more than 130 billion apps will be downloaded onto phones and tablets in 2014, and most of them will be free. At the same time, revenue from apps is expected to grow by over 200% in the next 4 years. That may sound contradictory, but the reason has been clear to many developers for some time: while the first app economy was predominantly focused on paying for apps up front, we’re now seeing the rise of a second app economy, the era of free apps and incremental payments.

In this second app economy, the currency of success has altered significantly, centered on three critical areas:

To help every developer succeed in this new economy, the AdMob team will be at the Game Developers Conference today to share four announcements.

1. Google Analytics now directly available in AdMob.
We introduced mobile app analytics in mid 2012 and there are hundreds of thousands of app developers using it already. We've now built Google Analytics directly into AdMob so developers can understand how people are using their app, segment them based on behavior in just a few clicks, then act on those insights. For example, the Google Analytics ecommerce report shows key insights into in-app purchases: top items sold, overall revenue and average order value. Now that Google Analytics is built directly into AdMob, developers can have a holistic view on their monetization based not only on revenue from ads but also on in-app purchase performance. All these functionalities have been incorporated into the updated Home tab in AdMob, making it a one-stop shop for all your performance reports.

2. In-App Purchase Ads.
To help developers promote in-app purchases to users in a more relevant way, we're also introducing in-app purchase ads. A developer can use these ads to promote in-app items at the right time to the users who are most likely to make a purchase, while still showing AdMob ads to those who aren't. Segmentation tools enable developers to quickly find these users, and then in-app purchase ads can be used to build relevant interstitial ads to reach them. For example, a developer can discover which of their users began playing their game in the last 48 hours, and promote a ‘welcome pack’ of extra lives at a 50% discount. This creates a more customized experience for users and can help prolong engagement. A developer can also choose where to place these interstitial ads in their app, and they can appear in either portrait or landscape mode. 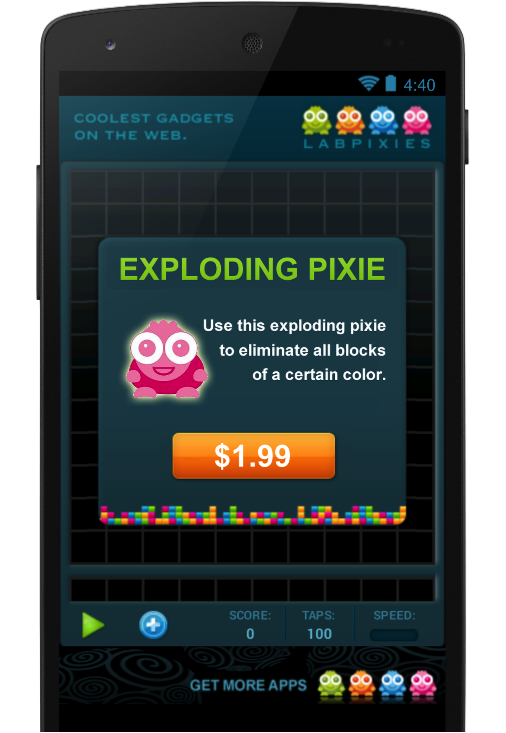 Live CPM goes one step further to ensure developers earn the most money from their ad impressions. When a developer uses AdMob to monetize, they get real-time access to all of Google’s demand sources, including programmatic demand, via our integration with DoubleClick Ad Exchange. For each ad request, Live CPM compares the highest CPM a developer can get from Google’s demand sources, with the CPM they could get from other networks in their mediation stack. If a higher-paying ad is available from Google’s demand sources, it will serve that ad over lower-paying CPMs offered by the other networks. App developer iHandy Inc. began using Live CPM in February this year. Many apps' revenues increased at different rates, and certain apps achieved a 200% increase.

4. The App Developer Business Kit.
The App Developer Business Kit is an in-depth website designed to help app developers understand ways to build a successful business. For example, there are detailed chapters about building an app, different ways to earn money, and options for marketing your app. You can also check out the interviews with developers, read case studies and view market insights from AdMob surveys which give developers a head start into building apps for global users. For example, did you know that a third of smartphone gamers in China have spent money in apps to personalize characters?

Tune into Google’s GDC livestream today at 10AM PST. We have sessions for game developers all day, and the AdMob talk is from 12-12.30PM PST.

When we’re not guiding a tiny bird across a landscape of pipes on our phones, we’re getting ready for our biggest-ever Developer Day at this year’s Game Developers Conference in San Francisco. On Tuesday 18 March, all the teams at Google dedicated to gaming will share their insights on the best ways to build games, grow audiences, engage players and make money. Some of the session highlights include:

And there’s a lot more, so check out the full Google Developer Day schedule on the GDC website, where you can also buy tickets. We hope to see you there, but if you can’t make the trip, don’t worry; all the talks will be livestreamed on YouTube, starting at 10:00am PDT (5:00pm UTC).

Then from 19-21 March, meet the Google teams in person from AdMob, Analytics and Cloud at the Google Education Center in the Moscone Center’s South Hall (booth no. 218), and you could win a Nexus 7.

This release adds new DFP specific APIs to the com.google.android.gms.ads.doubleclick package. For example, you can use the new APIs to request a 320x50 banner ad from DFP as follows:

Check out the DFP docs for more examples on how to use the new DFP APIs. If you’re migrating from the old AdMob Android SDK to Google Play services, be sure to also consult our migration guide which summarizes implementation details for the new APIs.

Search Ads for Apps support has also been added in this release, with new APIs in the com.google.android.gms.ads.search package. A search ads banner request in Google Play services looks like this:

Consult the Search Ads documentation for more information on how to customize your SearchAdRequest.

See the Ad Exchange documentation for more information on implementing Ad Exchange with the new library.

We’ve added back the setLocation method to enable you to provide location to an ad request. Note that location should only be provided if your app already makes use of location.

Assuming you’ve grabbed location via a suitable method, you can pass the location when building an AdRequest:

The new library can be downloaded from Android’s SDK manager. Consult the setup guide for detailed installation instructions. You can see a full list of changes on our release notes page.

Give us a shout on our forum with any questions or concerns about the release, and stay tuned on our G+ page for the latest updates (and maybe even a tips/tricks campaign!) on Google Mobile Ads APIs.